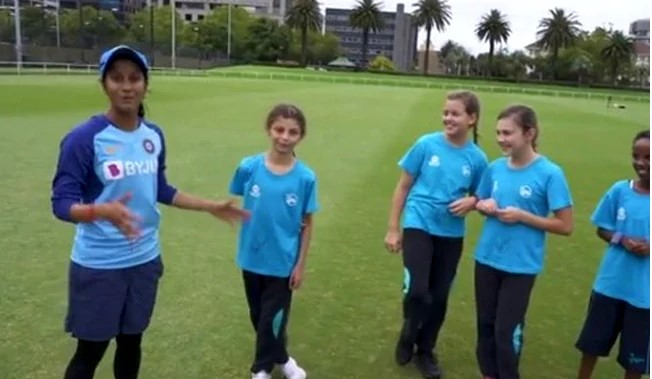 The Indian Women’s Cricket team is winning heats down under! From Shafali Verma’s explosive batting to Jemimah Rodrigues’ shimmy with an off-duty security guard, this team has it all. But the latter found herself in the spotlight as the video of her dancing with the security crew went viral, as soon as ICC uploaded it on their social media channels earlier this week. Rodrigues, clearly an ardent fan of Bollywood, this time teamed up with her colleague Harleen Deol to teach a few youngsters in Australia some “Bollywood steps”.

On Saturday, the International Cricket Council shared a video on Instagram where Jemimah can be seen as a dance teacher to some young Australian girls – teaching a “Bollywood step”.

“Jemimah Rodrigues is dancing again! This time teaching her moves to some kids,” ICC wrote.

💃Jemimah Rodrigues is dancing again! 💃 This time teaching her moves to some kids! 😂 #T20WorldCup

The video shows an excited Jemimah, telling the kids on how to perform the steps of “Haan Main Galat, a Bollywood track from actor Kartik Aaryan’s latest movie Love Aaj Kal 2.

The actor himself was also impressed by Jemimah’s dancing skills and retweeted ICC’s post (her performance with the security personnel) on Thursday. After revealing that the ace-opener is his “favourite cricketer”, Aaryan also asked Jemimah to bring the World Cup trophy home in the tweet.

The 19-year-old Mumbaikar made her international debut back in 2018 and has represented the country in 16 ODIs and 43 T20Is since. During this period, she has six fifties in the 20-over format and three half-centuries in ODIs under her belt; and has scored 85 runs from 4 games in this year’s ICC Women’s T20 World Cup.

Team India meanwhile, marched on to the semis as they remained unbeaten in the group stages, beating Sri Lanka by seven wickets on Saturday in their final Group A match.

Sri Lankan captain Chamari Athapaththu won the toss and elected to bat first, but spinner Radha Yadav had other ideas, as she tore apart their batting line-up with a fantastic spell of 4/23 in her four overs.

The Lankans lost wickets at regular interval and were restricted to 113/9, which was easily chased down by the Indian batters with 5 overs to spare.