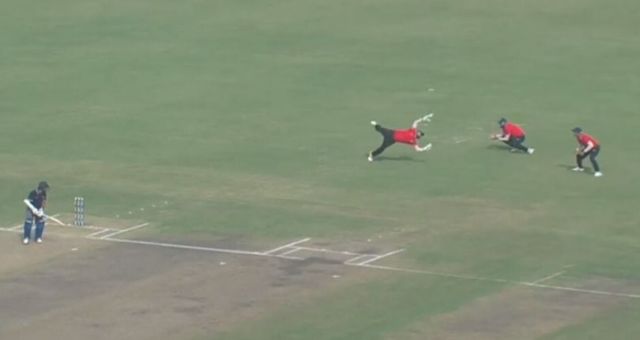 He may not play for the national team but that doesn’t mean he’s stopping either. On Monday, Tamil Nadu wicket-keeper Dinesh Karthik pulled off a stunner in the final of the Deodhar Trophy match between India B and India C. The 34-year-old is currently out-of-favour for India’s wicketkeeping options but he is a workhorse and comes up with something great pretty often.

It was the 9th over when Parthiv Patel edged a Ishan Porel delivery, but Karthik dived left with a full-stretch and took an absolute stunning one-handed catch. What important here is that the ball was traveling to first slip but wouldn’t have reached the fielder, the reason why Karthik decided to go himself and took the catch without any hesitation.

Naturally, it went viral on social media and fans, started mentioning how Karthik can be a potential replacement for Rishabh Pant, who is yet to find his form with the bat and the gloves.

Check out the stunner here:

And people call him ovwr aged..his time is over..he is 34…but the truth is that still he can fly like a bird like in 2007 where he took the stunner to dismiss smith… @DineshKarthik take a bow🙌 pic.twitter.com/a3cE8AanyN

I dont understand what wrong has @DineshKarthik done. He still deserves his chances in T20 and is a must for T20 WC. Has done enough to prove he is better than other keeper and finishers at present. @SGanguly99 @MSKPrasad_ @RaviShastriOfc @BCCI

India B started the game poorly, losing opener Ruturaj Gaikwad for a duck in the first over itself, but despite the early blows, India B put on 283 for 7 in the scoreboard with Kedar Jadhav (83) and 17-year-old Yashasvi Jaiswal (54) helped their team set a decent target. Not to forget Vijay Shankar (45) and Krishnappa Gowtham (35 not out) also played their part for the Parthiv-led team.