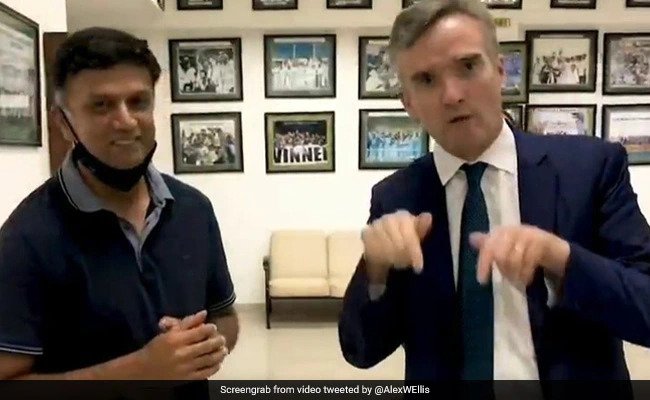 Former Indian cricketer and fan-favorite coach Rahul Dravid has progressed from a coach to a language teacher. Dravid was seen teaching Kannada to the British High Commissioner to India, Alex Ellis, during the India vs England Test series. 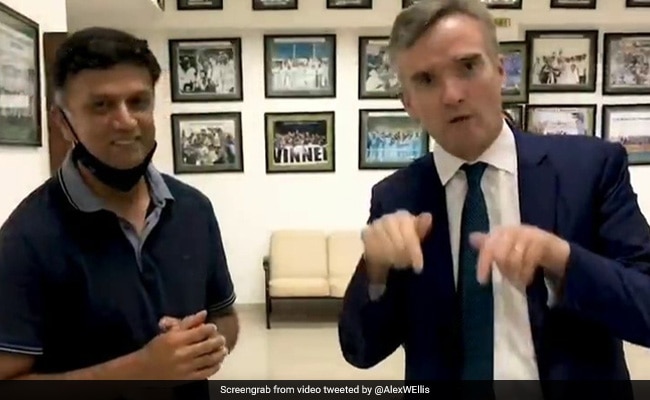 Before meeting Dravid, Alex had also introduced cricket fans in England to “a bit of cricket Hindi, with a dash of Tamil. This was his first attempt at learning cricket-related expressions in Indian languages.

As the First #ENGvsIND Test unfolds, my attempt, with the help of the @UKinIndia cricket team, to introduce #England fans to a bit of cricket Hindi, with a dash of Tamil. pic.twitter.com/BRQ7cQ34kx

The diplomat then took to Twitter on Saturday with a video in which he was seen learning some cricket-related expressions in Kannada. He enlisted the help of Team India head coach Rahul Dravid to help him in his quest of learning a new language.

“England and India are playing each other and I am on the hunt for the best Indian cricket expressions. We have come to Bangalore and we have come to one of the greatest players to have played the game and he’s going to teach me and you one phrase in the language of the state – Kannada,” Mr Ellis said in the video.

Rahul Dravid, in response, taught the diplomat a phrase in Kannada – “Bega Odi” or “one run”.

Today, we’re down south in Bengaluru.

What better teacher than ‘The Coach’ #RahulDravid, who taught taught me this in #Kannada ಕನ್ನಡ 👇 pic.twitter.com/tDCtHOcIwa

The video has gathered over 1 lakh views. Plus, people really enjoyed watching the duo and made their joy known in the comments.

It’s not only local cricket expressions that Mr Ellis is interested in. Ellis has also been tasting some famous regional delicacies of India. Last week, he shared a video in which he was seen tasting a dosa. He first tried it with proper cutlery and then with his hands, in order to decide which way worked better.

92% of Twitter is correct! It tastes better with the hand. ✋

The first test between India and England was spoiled by rain. Now, both teams will compete at Lord’s in the second Test on 12th August. India was not only beaten but decimated the last time when both teams faced off at Lord’s. Hence, Indians would be eyeing redemption.