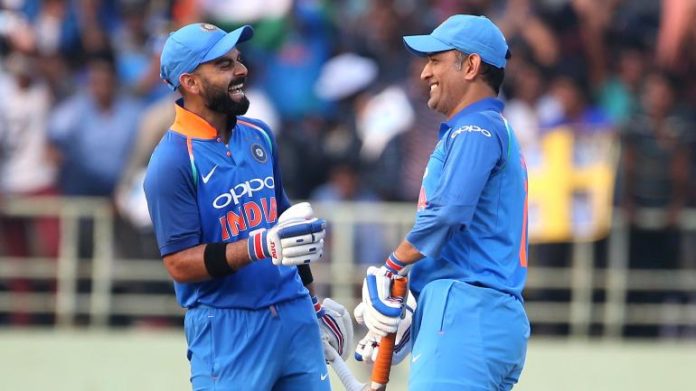 MS Dhoni’s exemplary  awareness of the game and his camaraderie with skipper Virat Kohli were both in full display during the 2nd T20I at the M. Chinnaswamy stadium in Bengaluru. Virat Kohli is often seen seeking help from the Jharkhand cricketer in setting up the field and the bowlers continue to thrive under his guidance from behind the stumps.

Ahead of the first ODI between India and Australia, BCCI have released a video showing the bromance between former Indian captain MS Dhoni and skipper Virat Kohli.

The duo was seen forging a vital 100-run partnership for the fourth wicket that allowed India to post a competitive total of 190 runs. Captain Kohli scored a spectacular  38-ball 72 which included two fours and six sixes. While Dhoni yesterday displayed a vintage version of himself  scoring a breezy 40 runs off 23 balls, slamming three fours and three sixes in the process.

India eventually lost the game and the series as Gelnn Maxwell took the game away from India. Scoring 113 not out off 55 balls, Maxwell dominated the Indian bowlers and struck as many as nine sixes to reach the triple figure for the third time in the shortest format.

Following the T20I series lose The Indian cricket team will be looking to bounce back when they take on Australia in the first ODI in Hyderabad on Saturday. This will be the last ODI series for India before the ICC Cricket World Cup 2019 and they will be looking to finalise their combination ahead of the major tournament.