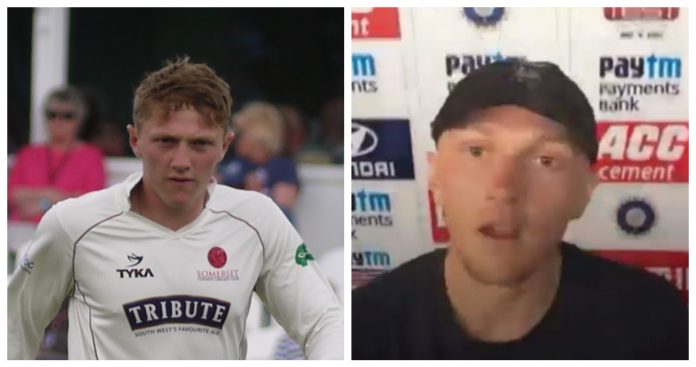 As Team India have been taking on England in the first test, England off-spinner Dom Bess had faced a funny moment during a recent virtual media interaction at the end of the third day’s play at the MA Chidambaram Stadium in Chennai.

Notably, Bess had a stunning day against India on Sunday as he claimed four Indian wickets. After the game, he was interacting with the media persons when the advertising board fell on him and he was hit on the head by the advertising board as well. However, the off-spinner didn’t get angry or showed any emotions as he continued to speak on the game as well.

Speaking after a fine bowling performance for England against India, cricketer Dom Bess managed to keep his composure as the backdrop to his press conference fell on his head pic.twitter.com/7U9JLUoDJT

“It’s certainly up there with the most satisfying wickets of my career,” Bess said while talking about Virat Kohli’s dismissal. “Obviously he’s a phenomenal, world-class player. But it was special more for what my process was.”

“It wasn’t about bowling that magic ball. It was about smashing in 10-15 balls in a good area. Then something will happen. It’s the process of getting there. I was really pleased that I kept him in a spot, then one has gone and it’s straight to Ollie Pope,” he further added.

On the other hand, on Monday India were bowled out for 337 in their first inning in reply to England’s 578. However, later the host got a target of 420 runs to win and as of now, they need 276 runs to win with 4 wickets in hand. While the young opener Shubman Gill scored a stable half-century, captain Virat Kohli stood strong at the end at 45*. Alongside him, veteran Ravichandran Ashwin is also in the middle.