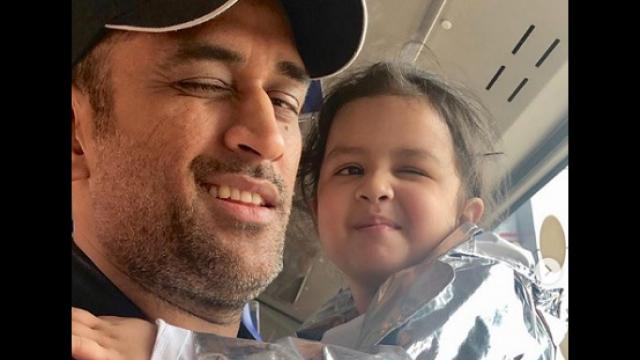 MS Dhoni is enjoying his sabbatical to the fullest. The legendary Indian wicketkeeper haven’t played for the national team, since this year’s World Cup and has been spotted spending his vacation with friends and family. And on Saturday, ‘Captain Cool’ was seen getting a nice shoulder massage from his daughter Ziva. In the adorable video, which was uploaded on her social media page, Ziva is seen sitting on the couch along with her father and hugging him from behind. And MS, clearly appeared to enjoy all the attention he got from his little daughter.

Dhoni has taken a break from cricket since the World Cup semi-final and opted not to return for the series against Bangladesh next month. With heavy speculations on his international future, India’s chief selector MSK Prasad last week, commented that the Men in Blues haved move on and will provide more opportunities to young wicketkeepers like Rishabh Pant and Sanju Samson.

Ravi Shastri on the other hand, has asked the media to stop fuelling speculations on MS Dhoni’s future, quoting it as “downright disrespectful” to both the cricketer and his contribution for Team India.

In an interview, Shastri, claimed that Dhoni had retired from Tests in the perfect moment, and that, only he has the right to decide when to retire from the limited-overs formats of the game.

Meanwhile, India’s world cup winning captain has kept himself busy off the field with numerous activities since July. He even joined the Territorial Army (106 TA Battalion) in Jammu and Kashmir after the World Cup and even trained with them for two weeks.