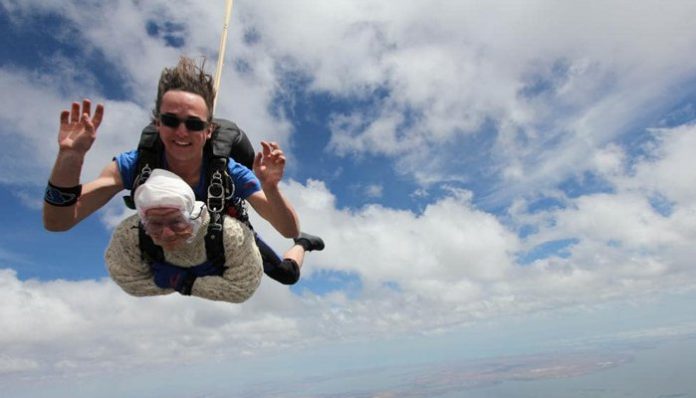 Australia’s Irene O’Shea became the world’s oldest skydiver after plummeting 14,000 feet (4,300 meters) through the Langhorne Creek Dropzone on Wednesday. The great-grandmother told the Australian media that she “felt normal” after completing the trip which saw her dive at a speed of roughly 220kph.

In case you are wondering, this is not the first venture of Irene O’Shea in skydiving. She forayed into skydiving to mark her 100th birthday. However, by doing so, she didn’t accomplish the record of being the oldest skydiver. It was Wednesday’s skydive that etched her name into the history books.

Irene’s daughter died from motor neuron disease 10 years ago. She is fundraising for MNDSA (Motor Neuron Disease South Australia) to help them find a cure.

“It was very clear up there, and the weather was good but it was very cold,” said Irene after taking the giant leap.

Here is the concerned skydive that has grabbed all the headlines:

The Sportsindiashow team salutes the efforts of Irene O’Shea and wishes her best of luck for her future endeavors. We also hope that she lives long enough to see a cure for Motor Neuron Disease.