The 2020 season of Indian Premier League (IPL) has started in a cracking way for a few teams whereas for others – it is nothing but a bizarre start. However, fans have been enjoying their favourite players’ performances fully – be it KL Rahul’s swashbuckling century, Sanju Samson’s maximums or Rashid Khan’s googly. Meanwhile, a trend has become viral on social media and many players have taken part in it. The recent inclusion was Eoin Morgan.

England’s world cup-winning captain Eoin Morgan shared his two pictures on Instagram for “How it started, how it’s going” where the first picture shows his early days as a kid in whites, the next picture shows Eoin Morgan with the World Cup which the team won last year under his captaincy.

While fans loved his post and started commenting as well, legendary Australia spinner Shane Watson’s took the limelight away from other comments. He jokingly took a dig at Morgan’s hairstyle and wrote, “Better haircut in first pic hahahahaha 😂😂”

To which, Morgan replied with some laughing emojis. 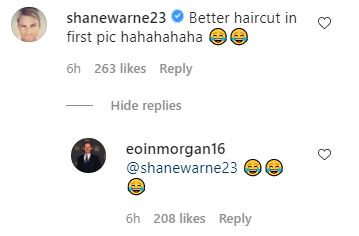 As far as Warne’s involvement in the IPL 2020 is concerned, the spin maestro has been associated with the Rajasthan Royals franchise and recently he was seen taking the responsibility of a mentor and sharing valuable tips to the spinners.

Having started well, Rajasthan Royals failed to keep up the momentum. While their top-order batsmen have been doing well in this season, their bowling department failed to live up to the expectations as well. Notably, the Rajasthan Royals have given away more than 170 runs in all their IPL matches except one. In that particular game, they lost by eight wickets having only put up 154 on board.

Wishing we were all spinners in the Royals camp right now. 💗

In a video shared by Rajasthan Royals on their official Twitter account in a few days ago, Shane Warne can be seen providing tips to Rajasthan’s leg-spinner Shreyas Gopal and Rahul Tewatia along with the captain Steve Smith as well. Not only technical tips, but the legendary spinner also opened up about their planning on the field and playing mental games with the batsman in the middle as well.

Ben Stokes asks why KKR sent Narine before Morgan, gets a stunning reply from Yuvraj Singh! 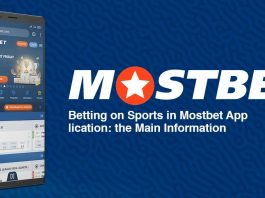 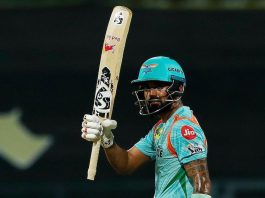