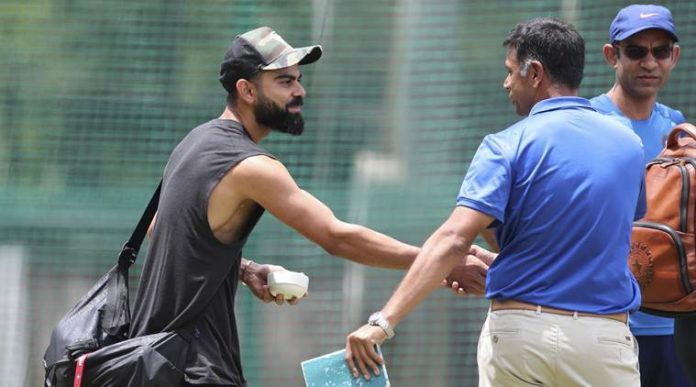 Former India batsman Rahul Dravid dropped by the Indian set-up before their clash against the Proteas in Bengaluru. The National Cricket Academy (NCA) head was in attendance during the optional training session at the M Chinnaswamy Stadium.

Head coach Ravi Shastri oversaw the proceedings after the players made their way down south from Mohali. Dravid proceeded to meet Shastri as well which prompted the BCCI twitter handle to come up with a tweet. Check out the tweet below:

The Wall was relieved of his duties as India A and U-19 coach and was appointed as the head of the National Cricket Academy in Bengaluru recently.

Team India made easy work of the visitors in Mohali and are on the lookout to seal the series by winning the final clash. Virat Kohli is expected to be on the spotlight yet again with the match taking place at M Chinnaswamy Stadium, the home of the Royal Challengers Bangalore, a franchise that the skipper has played for throughout his IPL career.

Meanwhile, the Proteas are struggling through their transition phase with experienced players such as Faf Du Plessis, AB de Villiers, and Dale Steyn being off the radar.

Then there were two: Sourav Ganguly narrows down India’s No.4 candidates to 2 prospects