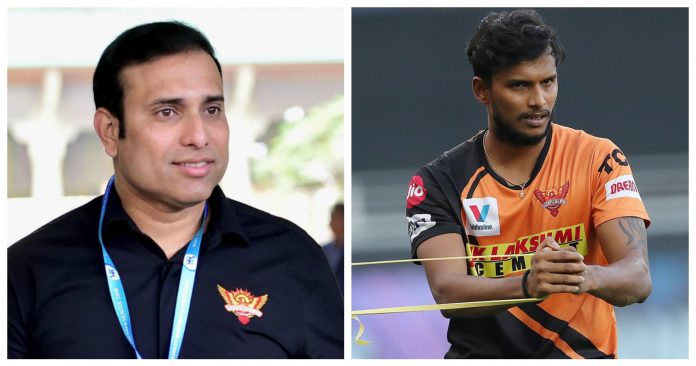 Sunrisers Hyderabad’s mentor and former India cricketer VVS Laxman on Saturday shared the reason why the pacer T Natarajan was out of the game against Mumbai Indians in Chennai. David Warner-led SRH made four changes in their playing XI and added Khaleel Ahmed in place of Natarajan. However, they again failed to win the match as they lost by 13 runs. And, with this, they registered their third defeat on the trot as well.

After the game, Laxman said that Natarajan had sustained a niggle in his left knee due to which he was out of the game. While talking to the media in the post-match virtual press conference, he said that the medical team will soon check him and decide his injury.

“Yeah, unfortunately, Natarajan missed out because of a sore knee and a niggle in his left knee, he was ruled out of this match. So, he was unfit for this match and that’s why we went with Khaleel Ahmed. We are going to assess the condition of Natarajan and I’m sure that the medical staff of Sunrisers will take the right decision which will be beneficial for him and the franchise,” VVS Laxman was quoted by ANI as saying.

VVS Laxman further added opened up about Khaleel and applauded for his stunning show in his first match of the IPL 2021. The left-arm pacer from Hyderabad claimed 1 wicket and gave away 24 runs in his 4-over spell as well.

“I was very impressed with the way Khaleel Ahmed bowled in his first game of the season. I think he assessed the conditions really well and used a lot of his variation along with extracting a lot of pace and bounce off the surface. So, a lot of positives for SRH in the Khaleel Ahmed bowled,” VVS Laxman said.

Earlier, SRH team director Tom Moody had said that T Natarajan was rested and he was not dropped. While speaking to Star Sports commentators, he added, “[Natarajan] Not dropped, rested – managing his workload, we know it’s a long tournament and he’s had quite a lot of cricket already under his belt.”

SRH will take on Punjab Kings next at the MA Chidambaram Stadium on Wednesday.