Indian batting legends Sourav Ganguly and Virender Sehwag graced their presence on the famous quiz show Kaun Banega Crorepati, hosted by popular Bollywood actor Amitabh Bachchan. The show was aired on Friday, 3rd September. The duo were playing for a noble cause as the amount of money that they won will be used for the benefit of society. 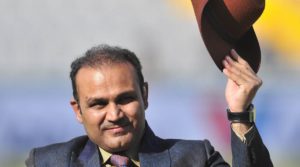 Both former Indian cricketers started on a bright note and had won upto Rs 40,000. The duo answered a question related to Tennis star Naomi Osaka, who pulled out of the French Open due to mental health issues. This led to a discussion between the trio about mental health.

BCCI president Sourav Ganguly stated about the pressure which modern players are under. The players have to live in stringent bio-bubbles without their families most of the time. This is a really tough thing to do as it can put mental pressure on a player.

Speaking English was mentally challenging in early stages of my career: Virender Sehwag During this discussion, Virender Sehwag shared his mental challenges in the early stages of his career. Sehwag, who was not fluent in English at that time had requested his first interview to be conducted in Hindi by Ravi Shastri. Although, Sehwag couldn’t get away by speaking in Hindi as Shastri questioned him in English.

However, Sehwag learned to speak English during the later stages of his career. For a brief period, he even took the role of commentating in English. But Sehwag reveals that he is proud of speaking Hindi wherever he can. Majority of his tweets and other social media posts are in Hindi too. He is not shy to express it either on various public platforms.

Since his retirement, Sehwag has taken up the role of a commentator. Now he mostly commentates in Hindi. Currently, Virender Sehwag is commentating on the ongoing India vs England test series in the United Kingdom.

ALSO READ: Umesh Yadav admits India failed to keep things tight after having England at 62-5 at one stage