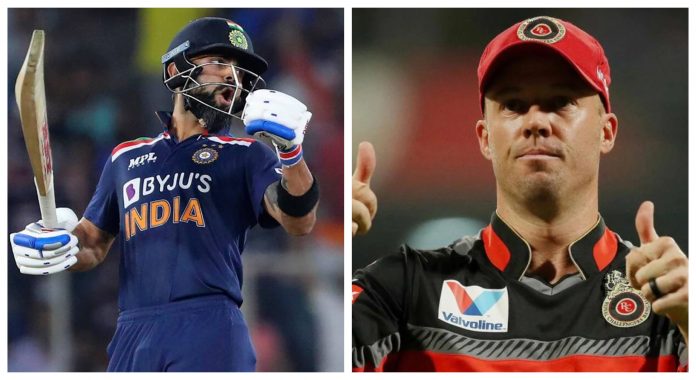 After failing to score in recent times and became a centre of debate due to his form, India captain Virat Kohli has finally returned to scores with an unbeaten 49-ball 73 in the second T20I against England. After his stunning show, he revealed that he had a chat with the team management, his wife Anushka and also with his Royal Challengers Bangalore teammate AB de Villiers before the game that helped him returned to the form.

“I had to shift the focus back to the basics of the game. Probably thinking of too many variables from the outside. I always take pride in the fact that I do the job for the team, so happy I did that than that I got 70 odd,” he said at the post-match presentation.

“Kept my eye on the ball. The management spoke to me about things. Anushka is here so she also keeps speaking to me about thinks. I had a special chat with AB de Villiers before the game. He told me just to watch the ball. So I did,” he further added.

Team India won on the back of a great show by the debutant Ishan Kishan who smashed a 32-ball 56 with 5 fours and 4 sixes. Alongside him, Virat Kohli too scored a fifty and took the team home. However, he applauded Washington Sundar, Ishan Kishan and Hardik Pandya.

“Special mention to Ishan. I tried to do what I can but he changed the game completely. He took the game away from the opposition totally. Quality innings on debut. We’ve seen him hit international fast bowlers for big sixes. He knew he was hitting the ball well but he was calculated, not reckless. Today that counter-attacking innings of his and our partnership was something the team needed.

He praised the bowlers for giving away only 34 in the last 5 overs. He mentioned Sundar who beautifully bowled in the game alongside Hardik and Shardul. He further added that they knew that there was a little bit of dew on the wicket and the ball will come to bat on a little better as well.

Both India ad England will take on each other in the third T20I on March 16 at the same venue.