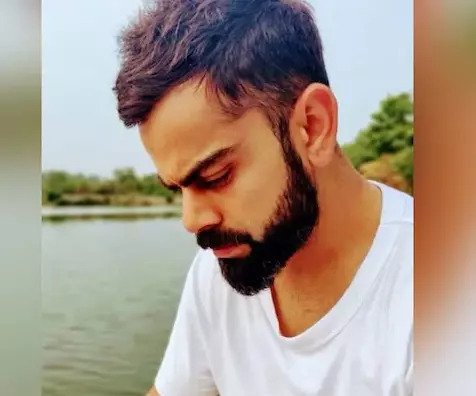 Virat Kohli on Monday, shared a picture on social media where the Indian skipper can be seen sitting by a water body. He captioned the photo as “Caught in the moment” and gave the photo credit to his actress wife Anushka Sharma. Although, it seems unclear where and when the photo was taken, some eagle-eyed fans pointed out that the small heart with the initial ‘A’ on his t-shirt, stood for Anushka.

I’m damn sure that A ❣ on you t shirt doesn’t stands for Ace of heart ! Instead it’s @AnushkaSharma !

The Indian captain and his boys were let down by continuous rain in the first T20I against South Africa in Dharamsala on Sunday; as the match had to be called off without a single ball being bowled at the spectacular Himachal Pradesh Cricket Association Stadium.

The match was scheduled to start at 7 pm but by 5:30pm the chances of a match seemed low. The HPCA ground staff toiled hard to clear the ground, however, the rain came back for a second spell spoiling the evening and the pitch as multiple puddles were formed at the outfield. Earlier, the weather forecast predicted light to moderate showers in the afternoon, with clear skies later in the evening.

The downpour left the Dharamsala crowd disappointed who wanted to see their favourite stars in action in India’s home season opener. The second game of the three match T20I series will be played at Mohali on Wednesday and the weather forecast is clear for that game.