We all are aware that Virat Kohli feeds off aggression and altercations. Often teams have avoided needling Kohli as it brings the best out of him. But this time Indian bowlers, specially Jasprit Bumrah and Mohammed Shami got extra fired up after heated exchanges with English cricketers on Day 5.

During the historic 9th wicket partnership between Bumrah and Shami, they were initially peppered with short balls and heated words. India captain Virat Kohli said that the verbal altercation between England players and the two Indian tail-enders Mohammed Shami and Jasprit Bumrah spurred them to go flat out at the home team with 60 available. 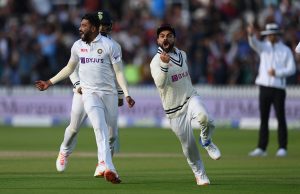 “The way we played in the second innings after being put under pressure – Jasprit and Shami were outstanding. We had the belief we can get them out in 60 overs. The tension in the field in our second innings, what happened there, helped us,” Kohli said in the post match interview.

The duo’s special was applauded by the entire team which came down from the dressing room to welcome them. Kohli also credited the batting coach Vikram Rathour for the hard work he has put in with the lower order batsmen.

“Putting their hand up was something we were really proud of and we wanted to let them know (standing ovation for Bumrah Shami). Batting coach has worked really hard with the boys.”

“They have the desire in them to do well for the team. We know how priceless those runs are. The belief (from lower-order) was missing for a while but now it is back,” said Kohli.

They should feel hell out there: Virat Kohli in the team hurdle

Kohli declared the innings when India were 270 odd runs ahead. Just before going into bowl with 60 overs remaining, Kohli was seen giving a pep talk in the team hurdle. He was charging up the players and telling them to make England’s 60 overs feel like hell.

And Indians eventually got the job done in 51.5 overs with pacers producing a high quality show to dismiss England for 120. India’s fast bowlers picked 20 wickets in a match for the second consecutive time.

The star of the show was Mohammed Siraj, who took another four wicket haul in the match. Bumrah, Ishant and Shami contributed with 3,2 and 1 wickets respectively. Root again top scored with 33. The next best score for England was of extras(24).

Here’s how Indian players reacted after the historic win:

What a game of cricket 👌
Everyone stepping up, love the commitment and attitude. Way to go boys 🇮🇳 💪 pic.twitter.com/hSgmxkLiiP

Every single one of us wanted this win, you could see it, you could feel it and watching it play out was incredible. pic.twitter.com/cJJ6PpcHm5

When you work hard results show on the field. A proud moment for me personally to deliver with the bat for 🇮🇳. Loved my partnership with Bumrah🙌🏾 #TeamIndia #mshami11 pic.twitter.com/5c1zvZaUJb

A memorable game, a terrific fighting spirit on display.
Great win for us as a team at the #homeofcricket 😍🇮🇳
Let's carry on the momentum ⚔️💪 pic.twitter.com/3DgOVnuMY1

Can’t put into words the feelings that we’re going through after that win! So proud of the whole team 🔥 pic.twitter.com/FRH20cbujl

A win for the ages 🏆🇮🇳 pic.twitter.com/gNxXaazwRd