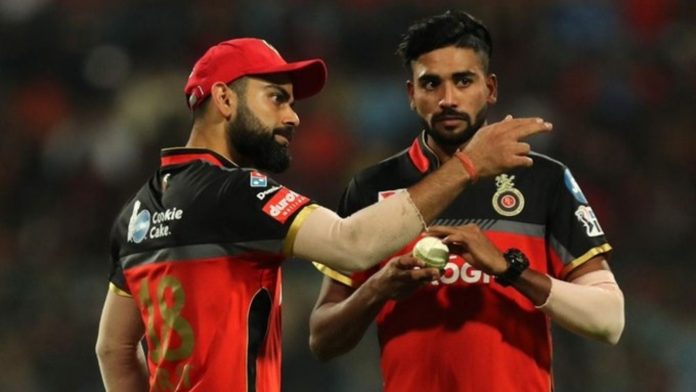 Skipper Virat Kohli and pacer Mohammed Siraj had been in Manchester for the fifth Test match against England. But the match was cancelled after reports of covid infected Indian players started making rounds.

The outbreak of coronavirus among the Indian contingent forced to team to fly back home and stay in quarantine. While the other players on the team returned home, Virat and Siraj flew to Dubai prepare for the Indian Premier League 2021 resumption.

There were smiles, hugs and laughter in the RCB camp as captain Virat Kohli, Mohammed Siraj and some of our foreign players had their first hit in the nets.#PlayBold #WeAreChallengers #IPL2021 pic.twitter.com/gxSEVf15rR

The Royal Challengers Bangalore camp was filled with happy faces and warm hugs as the team welcomed their captain Virat and Siraj.

The video of the welcome party was posted on RCB’s Twitter handle with the caption:

“Bold Diaries: Virat Kohli joins the RCB team after quarantine. There were smiles, hugs and laughter in the RCB camp as captain Virat Kohli, Mohammed Siraj and some of our foreign players had their first hit in the nets.”

The IPL 2021 resumption is to take place in the United Arab Emirates. The match was stopped midway after several players turned out to be Covid-19 positive. The governing body decided to move the tournament outside of India.

RCB is to resume their challenge against the Kolkata Night Riders in the IPL series on Monday.

Fans of RCB will witness their team wearing blue and not black/red Jerseys, this time to extend their support to the frontline workers.

Virender Sehwag, former India captain and batsman, wants Virat to win at least one trophy for the Royal Challengers Bangalore. The franchise has not won a single trophy under Virat.

“IPL is important for every captain, but I think more so for Virat, as with his huge fan base, everyone wants Virat to win a trophy for the Bangalore franchise. If not multiple times then at least once in his tenure as captain.”

“This has been a strange year off the field due to the pandemic and who knows it might be a different year for Bangalore from previous seasons and they go on to win the trophy.”

India has not won an ICC trophy either under Virat’s captainship and he has already been getting the heat because of it.