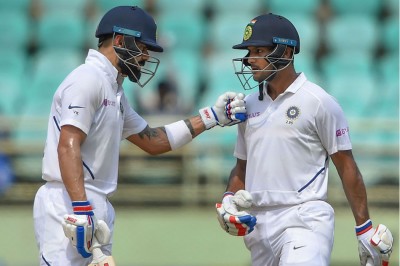 While Virat Kohli has opted out of the ongoing three-day warm-up match against Australia A, he is certainly not out of the overall picture. The Indian skipper has donned the batsman’s role, the skipper’s role and now he has the mentor’s role to add to the list. Kohli stood by opener Mayank Agarwal’s side to iron out a few minor technical flaws and prepare him for Cummins and co.

Whether it be his debut test ton, the Adelaide twin knocks or the Perth masterclass, one does not require a second glance to affirm whether Virat Kohli can bat in the land down under or not. Arriving with the Indian contingent for the fifth Australian tour if his career, the captain, while focusing on his game, can also share his valuable experience to the players who are settling.

A report in the Mid-Day claims that Kohli switched his focus to Agarwal after arriving into the nets for a session with the pink ball. The 29-year-old was hard at work after enduring a tough spell from Jasprit Bumrah in a net session last week. With a similar threat posed by the Australian pace attack, Kohli stepped in and helped with some valuable tips to make the opener’s life easier.

The Indian skipper suggested Agarwal take his hands higher while leaving a short delivery and also wanted him to stay on his toes while playing such deliveries to ensure maximum balance and control over the shot.

In the end, Kohli was more than satisfied with the results and chimed “Look, you did it perfectly the last few balls without thinking or me having to mention it.”

The Kings XI Punjab opener has had a tough time facing fast bowling as of late. He was castled twice by Jasprit Bumrah in the IPL before having a hard time once again in the nets.

Moreover, in the ODI series, he was targeted with the short deliveries and succumbed to Cummins and Hazlewood and was subsequently dropped and replaced by Shubman Gill for the third ODI.

Dismissed for just 2 in the first innings of the warm-up match, Agarwal turned up with a decent knock of 61 in the subsequent innings to cap off a good outing ahead of the first test starting on December 17.

A 500-run scoring batsman will be crucial for Team India in the Australia Test series, claims Rahul Dravid