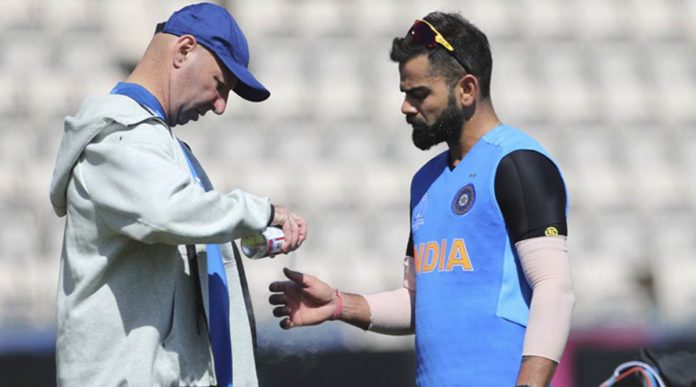 India starts its World Cup campaign against South Africa on the 5th of June, in Southampton. While India is starting their World Cup on Wednesday, South Africa will be playing their third encounter. But, India’s skipper, who is India’s biggest asset and World’s best batsman, stares at an injury scare. In a training session on Saturday, Virat Kohli hurt his thumb.

However, if Kohli hurt himself in the nets or in a fielding drill is not yet known. Post that blow on the thumb, Kohli was attended by the team physio for a brief amount of time. He then left the field, with his thumb dipped in a glass of ice.

The team management has not made anything official as of now. However, this is something that will surely draw a lot of attention. India’s clash against South Africa is still three days away, and hence Kohli has a lot of time to recover from the injury if it is not so serious.

While talking to the PTI, team sources said, “He got hit while batting but is doing fine. There is nothing to worry as of now.”

India lost to New Zealand by six wickets after being bowled out for 179. But post that, India won the second warm-up game convincingly, and are back on track after defeating Bangladesh.