Team India were blown away by the English team in the first innings of the third test. The Virat Kohli-led side were bowled out for a meagre 78. This deficit is completed by the English openers alone. Hence, Team India are now the favorites to lose the test. 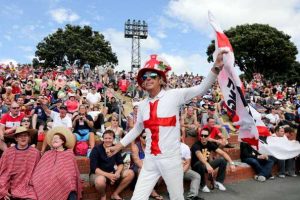 Winning the toss and electing to bat first turned out to be a disastrous decision for Virat Kohli. Only positive India will take away from day 1 is that Kohli won the toss. The Indian team displayed a pathetic batting display. However, England’s outstanding bowling gave the opportunity to the Barmy Army to give a proper send-off to the Indian batsmen.

Thus, Barmy Army gave the Indian captain a musical send-off when he walked back to the hut whilst the ongoing match. Kohli produced another average knock where he managed to score 7 runs before falling to his arch-enemy James Anderson.

The Barmy Army took it to Twitter to share a video of the fans singing ‘cheerio.’ They are seen bidding goodbye to Kohli as he is walking back to the pavilion. Barmy Army captioned the video as: “Cheerio Virat

Jimmy has 3 in the first-hour 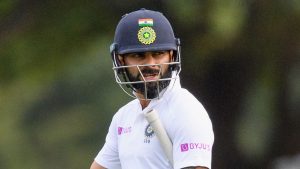 It has been 50 innings since Virat Kohli has scored an international hundred. Arguably, he is going through the worse patch of his career. This phase of his career looks to be much worse than the England tour in 2014.

In this innings too, Anderson bowled a length ball which Kohli looked to drive through covers but it hit the outside edge and Jos Buttler made no mistake behind the stumps. The Indian openers failed to provide a good start for the first time in the series. Pujara and Rahane have been inconsistent for a while now. Lastly, the Indian tail wasn’t able to repeat their miracle of the Lord’s test.