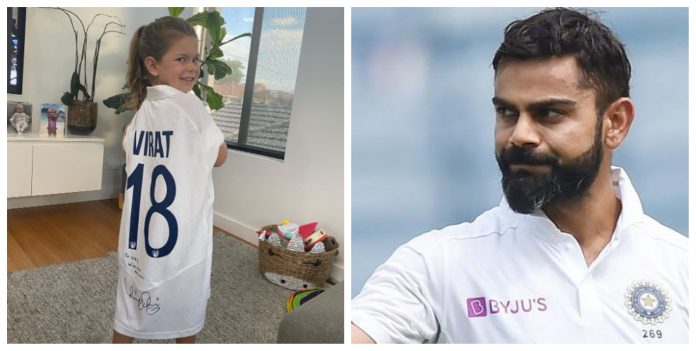 While the on-field competition between India and Australia is known to all, their off-field camaraderie is not at all a secret as well. Australia players take part in the cash-rich Indian Premier League whereas everyone knows the swashbuckling Australia opener David Warner’s second daughter Indi Rae is a die-hard fan of India captain Virat Kohli.

While the fact is not at all a secret, Kohli, being a good human being, ensured to keep his little fan happy. He has gifted his jersey to his special fan. However, the little fan of Virat Kohli was overjoyed and super happy that she wore that jersey despite being oversized and his father happily shared the photograph with the fans on his social media account as well.

Although Australia lost to India in the four-match Test series 2-1, the Australian opener revealed that his little girl was quite happy to get the special jersey numbered 18 from his favourite Virat Kohli. However, he also thanked Kohli for his sweet gesture as well.

David Warner shared, “I know we lost the series but we have one very happy girl here!! Thanks @virat.kohli for your playing jersey, Indi absolutely loves it. Besides daddy and @aaronfinch5 she loves VK 😂😂 #fan #love #cricket”

However, this became viral in no time and fans started commenting as well. Here are some tweets on how Twitterati reacted after that:

This is so beautiful ❤️

This is real love shown from your daughter for Indian cricketer @imVkohli. Proud of @imVkohli .

Meanwhile, India captain Virat Kohli is all set to return to the international cricket with the upcoming series against England. He last featured in the first Test against Australia in Adelaide last month before he returned home to be with his wife, Anushka Sharma for the birth of their first child following the grant of his paternity leave. In his absence, stand-in captain Ajinkya Rahane led India in the final three Tests and secured a historic series win as well.