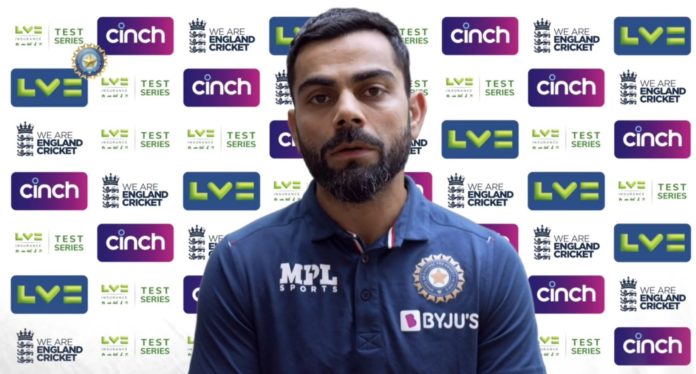 Ahead of the second Test at Lord’s, India skipper Virat Kohli admitted that the team is not pleased over losing two points in the WTC table due to slow over-rate. Both teams were deducted two points each after maintaining a slow over-rate during the first Test at Trent Bridge, Nottingham.

Apart from the points deduction, squad members from both the camps were docked 40 percent of their match fees. Virat Kohli and England captain Joe Root agreed to the charges which omitted the need for a formal hearing.

The  Indian skipper felt that the team is far from pleased for having lost points over something that is well under their control. This is a possible concern that arrives with the prospect of four seam bowlers and the lack of spin bowling. Kohli said during a virtual interaction ahead of the Lord’s Test:

“As a team we were not pleased that we lost two points due to something which is definitely in our control,”

Kohli claimed that the team desperately tried to make up for the lost overs in the second innings, but ultimately fell short by two overs. He added that it is important moving forward that time be saved whenever the opportunity arises, even small durations count at this level. He added:

“We made up quite a few overs towards the end in the second innings, we were short by 2 overs. That’s basically what we need to do. We need keep up with the pace of the game. All little things where we can save 10-15 seconds is what really matters. We practiced that in the second innings and we were able to cover up three or four overs. You don’t want to be that far behind where you can’t catch up,” he said.

Virat Kohli will lead the Indian outfit at Lord’s in a bid to recreate their 2014 win and go 1-0 up in the series. Both the camps are set for changes into their playing eleven.

India will be without Shardul Thakur for the Test as he is struggling with a hamstring injury. On the other hand, England have confirmed that Stuart Broad has been ruled out of the series after scans revealed a tear, whereas, James Anderson is a lingering doubt for the contest at the Home Of Cricket as well. The Three Lions have called up Moeen Ali into the squad and Mark Wood is also in contention to make it into the playing eleven.