Indian cricket team has won their first two games against two of the very best teams of the tournament, South Africa and Australia. This has led many people to wonder that India has somewhat already put one of their feet inside the semi-finals. However, the Indian captain and the world’s #1 ranked batsman Virat Kohli is still a bit hesitant in claiming that India will reach the semis. 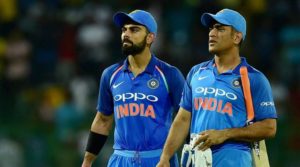 Kohli in a recent interview stated that it is still too early for India to think about the semi-finals. Here’s what he had to say:

I think it’s too early to decide that. I think after about six games we’ll be in a better position to know where we stand in the tournament. We couldn’t have asked for a better side against two strong teams.

The good thing is that we’re playing all the strong sides up front, so if we do well in the first phase, we’ll be in a better position to reach the semi-finals. From that point of view, we have to be at the top of our game and that is precisely what we have done in two games.