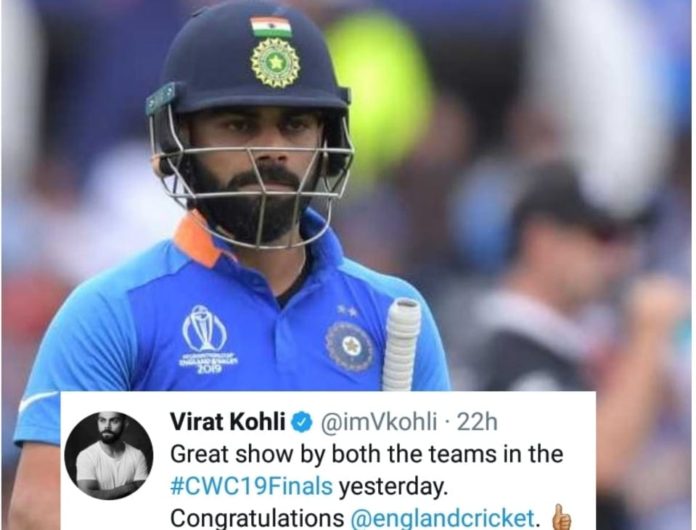 The cricketing fans all over the world ran short of words after witnessing a great final of the Cricket World Cup on Sunday at Lords. It will be a match which will inspire the generations to come. The English team might have won the championship but the Kiwi team won millions of heart with their attitude on the field even though the fortune was not on their side. 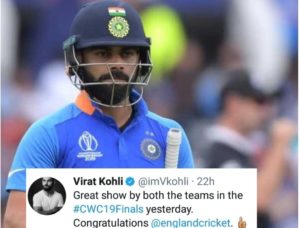 Both the teams played good cricket and in good spirit of the game and their names will be etched in the history books.

Following the finals many former and present cricketers took to social media to pour in the wishes to both the teams for providing a fitting final. Many India cricketers wished their counterparts including the skipper of the Indian Cricket Team, Virat Kohli.

Batting first the Kiwis put on a decent total of 241 on board. After an initial setback the Brits came back strong and with their own fightback. In the end the drama unfolded and both the teams were not separated even after super-over. Unfortunately the winner of the final was decided in an unusual manner on the boundary count.

Virat Kohli couldn’t resist himself from tweeting about the epic encounter. The Indian Skipper might be aggressive on the field but is a pure gentlemen of the field. Once again it was the Indian Captain who posted a a congratulatory message for the winning team. Along with it Kohli also applauded the efforts of the finalists.

Great show by both the teams in the #CWC19Finals yesterday. Congratulations @englandcricket. 👍🏼