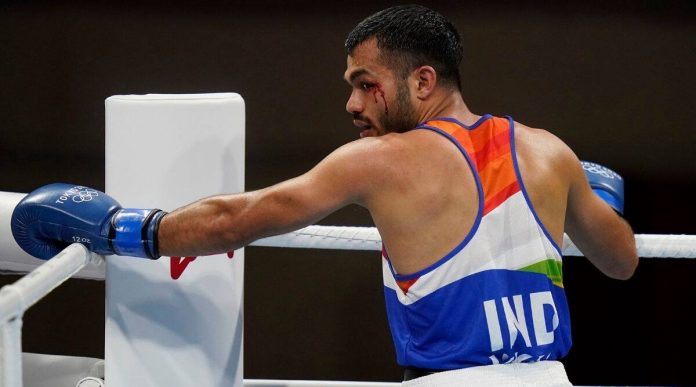 Ace Indian boxer Vikas Krishan, who suffered a premature exit out of the recently concluded Tokyo Olympic Games due to a shoulder injury, expects to complete his recovery and return to the squared circle in three months.

The three time Olympian was knocked out of the Olympics in the opening Round of 32 stage of the 69 kg welterweight category, losing to Sewon Okazawa. Aside from an abrupt termination to his Olympics campaigh, Krishan also suffered a dislocation on his right shoulder.

The injury is expected to keep him out of action until the end of this year, and Krishan underwent surgery at the Kokilaben Hospital in Mumbai by Dr Dinshaw Pardiwala.

While the boxer said that the injury had taken place during his training trip to Italy prior to the Games, he also calimed that he was oblivious about how serious the injury was, which, in turn, impacted his performance against Okazawa.

Nonetheless, the Haryanvi pugilist is on full confidence that he will return to action in the next 90 days, and the assurance comes straight from Dr Pardiwala, who is one of the most renowned surgeons in the country.

“I will be back in three months, I have been assured by Dr Pardiwala,” Krishan said in a recent interview with PTI, “my shoulder had dislocated and a crucial muscle, called Subscapularis muscle, and a ligament had been torn.”

“I believe all that bad that could have happened to me has happened and I will come out of it stronger and better. I am not going to give up,” the 29-year-old added.

After a pre-quarterfinal and a quarterfinal finish at the 2012 and 2016 Olympic Games respectively, Tokyo was Krishan’s third Olympics appearance. The World Championship bronze medallist turned pro in 2019 and inked a deal with Top Rank and currently has a record of 2-0 with a knockout win.