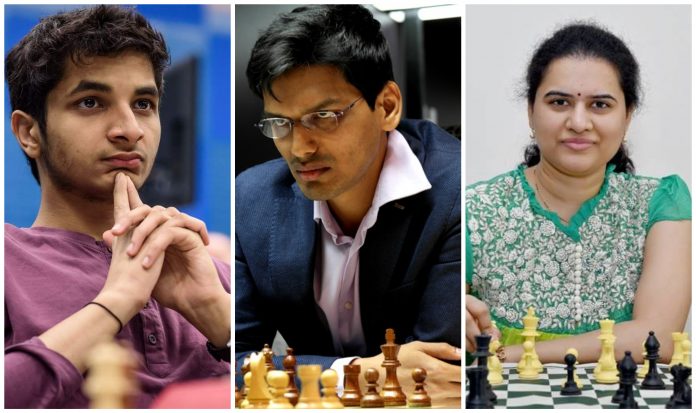 Great news for the Indian chess fraternity as Grandmasters Vidit Gujrathi and P. Harikrishna are confirmed to take part in the upcoming World Cup, while Koneru Humpy has clinched her birth for the Candidates tournament.

Both Vidit and Harikrishna received confirmation directly from the International Chess Federation (FIDE) about their participation for the World Cup, which is slated to take place Sochi, Russia from 10th July onwards.

Ranked 22 and 20 respectively, Vidit and Harikrishna’s World Cup spots were confirmed after some of the top seeded players decided to pull out of the event.

Furthermore, B. Adhiban, who is the highest ranked Indian chess player after Viswanathan Anand, Vidit and Harikrishna, was nominated for the World Cup by the All India Chess Federation, as FIDE lets 91 countries to nominate one player who has not qualified.

After two time World Champion Anand decided to forfeit the event despite gaining an automatic qualification, the Indian contingent at the tournament will comprise of Vidit, Harikrishna, Adhiban, Aravindh Chithambaram, and P. Iniyan in the 206-player men’s section. There will also be one additional wild card entry.

Koneru Humpy, who will be seen in the 103-player women’s section alongside D. Harika, Padmini Rout, Bhakti Kulkarni and P. Vaishali from India, has made the cut for the Candidates tournament after finishing 2nd in the overall standings of the FIDE Women’s Grand Prix, where she was a runner-up.

“I was closely following the Gibraltar tournament and am relieved and happy that the results went my way,” Humpy spoke to told Sportstar, “it feels great that I have qualified for the Candidates with my Grand Prix performance alone.”

At the Grand Prix, Humpy finished with 293 points consisting of two legs (wining the first leg and coming in 2nd in the second leg), behind Alexandra Goryachkina of Russia, who scored 398 points.