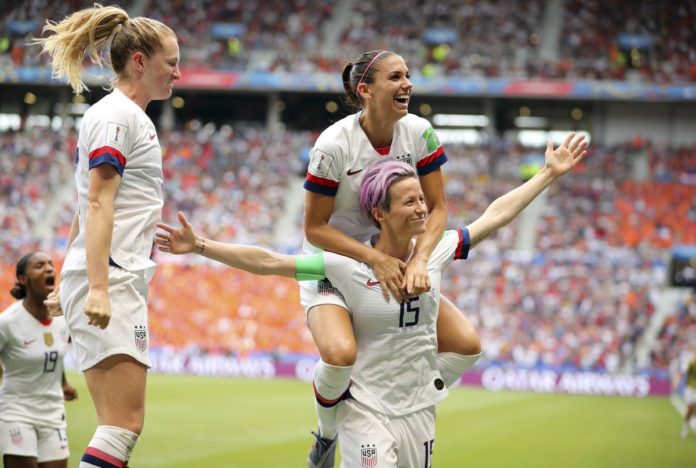 US Women’s national team have made history as to become the only team to have won four world cups as they defeated the Netherlands on Sunday by 2-0 margin in the FIFA WC 2019 which took place in France.

The United States who were the defending champions dominated the entire tournaments, but it was really the finals which frustrated the four-time champions. For the first hour, the US team failed to score any goals and the frustration was visible amongst the players. It was in the 61st minute when Megan Rapinoe converted a penalty to give USWNT their first lead. This was also Rapnioe’s sixth goal of this tournament.

The match was sealed in the 69th minute when Rose Lavelle fired the ball into the nets in what is considered a brilliant effort as she scored by a solo run up the center of the field.

“It’s surreal. I don’t know how to feel like now. It’s ridiculous,” Rapinoe said after the victory. “We’re crazy and that’s what makes us so special. We just have no quit in us. We’re so tight, and we’ll do anything to win.” Rapinoe was awarded the Golden Ball as the top player in the tournament. (H/T- CBS News)

POTUS Donald Trump took to Twitter to congratulate the national team for winning the world cup for a record fourth time.

Congratulations to the U.S. Women’s Soccer Team on winning the World Cup! Great and exciting play. America is proud of you all!

“Congratulations to the U.S. Women’s Soccer Team on winning the World Cup! Great and exciting play. America is proud of you all!” Trump tweeted.

Most Influential Women in Football