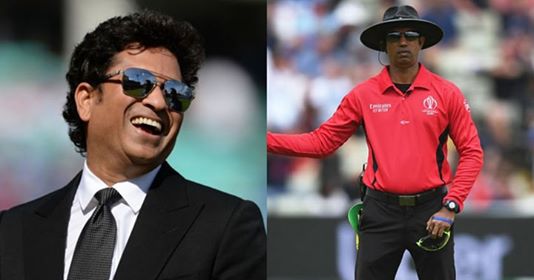 Today, Sachin Tendulkar uploaded a video on twitter. In the video, the bowler bowled the ball and the bails jumped but stayed on top of the stump. Technically, the bails had been dislodged. But the umpire’s decision was not out.

“A friend shared this video with me. Found it very unusual! What would your decision be if you were the umpire?” was the caption to Sachin Tendulkar’s tweet.

A friend shared this video with me.
Found it very unusual!
What would your decision be if you were the umpire? 🤔 pic.twitter.com/tJCtykEDL9

This tweet was soon flooded with replies. Some replies came in support of the bowler, while some were truly hilarious.

Batsman arrested but released on bail.

Some replies even saw Dharmasena’s name brought into it. This was to relate this video to the fault of Kumar Dharmasena in the World Cup final.

It's six if umpire is Kumar Dharamsena😂

He know how to handle such situations,,,👍🏏🤔 pic.twitter.com/4TYJr2szTV

If dharmasena was there it definitely out

If simon taufel was there it definitely not out!!#ICCRules

His decision will be final 👇https://t.co/2i900zrwNa

A few days back, umpire Dharmasena had admitted that he made a mistake in the finals of the mega-event. He had awarded 6 runs instead of 5 to the England team, in an overthrow decision.

“I agree that there was an error of judgement when I see it on TV replays now,” Dharmasena said.

The umpire also said that he did not regret the decision he had made because he did not have the facility of TV replays when on the ground.