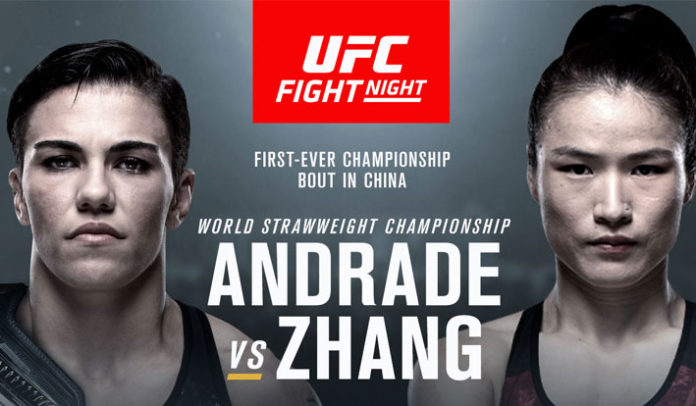 With last week’s fiery fight between Miocic finishing off Cormier, UFC travels to Shenzhen, China for exciting fight night with women leading the show this weekend. The main event of Women Strawweight will see Jessica Andrade is making a victorious comeback from her fight with Rose Namajunas and the sensational Weili Zhang will add to the dynamics of the fight as she comes into the Octagon with a 19 win score card flashing in the background. The co-main event will feature the best of the welterweight division between Li Jingliang and Elizeu Zaleski dos Santos who are known for their strategic moves that knock off their opponents.

With a clash between the strongest muscles vs the most strategic moves, UFC Fight Night 157 will witness some serious action at the helm at the Universiade Sports Centre in Shenzhen, China. While continuing her fiery streak of four consecutive wins, the last one being with Rose Namajunas, Jessica Andrade a.k.a Bate Estaca’ isn’t the easiest fighter to fight. She has always been one of those tricky fighters with a plethora of unpredictable moves and we can expect the preparation a notch higher as this fight night would be legendry in reigning the title of the Strawweight queen for her.

On the other hand, we have Weili Zhang a.k.a Magnum who might not possess as big a grandeur as Andrade but she has a straight 19-1 record including three straight wins in the UFC with a much-applauded victory over perennial top gatekeeper Tecia Torres in her last outing. While Zhang has a venomous ground game, Andrade sends reverberations across the octagon as she enters. The best moves for the best experience, it would be interesting to see how well they outplay each other.

With his last fight against David Zawada which engaged the crowd for a wild brawl, Li Jingliang a.k.a The Leech was seen finishing him with an insane superkick to the body, transforming to a stifling grappler. His opponent, Elizeu Zaleski Dos Santos a.k.a ‘Capoeira’ is one of the most dangerous and unorthodox strikers in the Welterweight division. He might look wild when he throws his combinations together as he’s happy to wing all sorts of spinning attacks at his opponents, but he’s emerged more polished than we last saw him picking apart Max Griffin in 2018. It seems that essentially Li has more ways to win, but it’s feared whether he will choose the hard way or the smart way to fight it out this time.