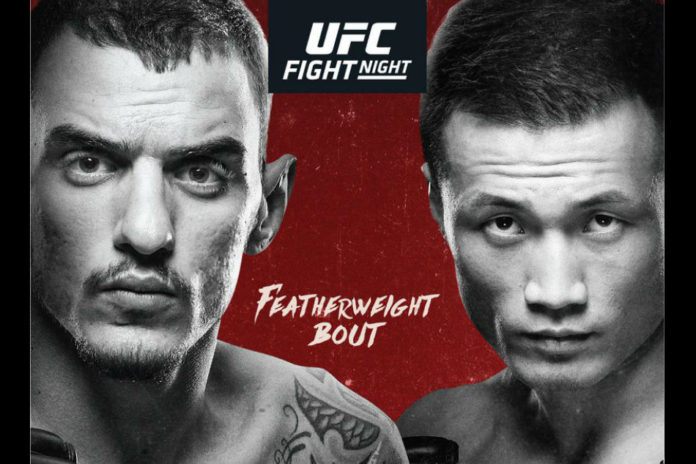 This weekend, UFC Fight Night 154 will feature several exciting fights at the Bon Secours Wellness Arena in South Carolina, Greenville. The audience is will witness multiple nail-biting moments as ‘The Korean Zombie’, a.k.a. Chan Sung Jung faces the super talented Renato Moicano from Brazil in the main event while heavy handed Brazilian slugger Jon Linekar faces Rob Font in the co-main event for the second time since their last meeting back in 2016.

Emerging from the land of the bruised, Renato and Chan both share a history of defeats from Jose Aldo and Yair Rodriguez respectively, which they aim to reverse this time. This comeback fight is marking Jung’s third fight in nearly six years despite his injuries and military service, while Moicano who has been ever phenomenal in the Octagon is looking to recoup some of the momentum he lost in February. While Moicano has incredible grappling and leg kicks, The Korean Zombie’, on the contrary has the technique and power to at least secure a late finish, if not earning points.

And this is why the audience can expect nothing less than flying punches and kicks in the octagon since both these fighters are hungry for the featherweight title shot after their recent losses.

The heavy-handed Brazilian Thor a.k.a John Lineker will be meeting his long time frenemy Rob Font at UFC Fight Night 154 since their last fight back in 2016. Jon Linekar replaced the injured Cody Stamann to fight Rob Font on a short notice as he wants to ramp up his fights in 2019. With a win over his counterpart at UFC 198, The Brazilian will have to respect the skills and evolution of Font to pick up another win and gain momentum in the bantamweight title contenders list. Meanwhile, Rob Font is desperate for a shot at redemption and will look at this fight as an opportunity to break into the top 10 of the bantamweight ranking. With this excellent combination of experience and durability, it would be exciting to see the signature ‘one-punch’ knockout countered with many controlled grappling exchanges which will make this fight a tough stand-up battle