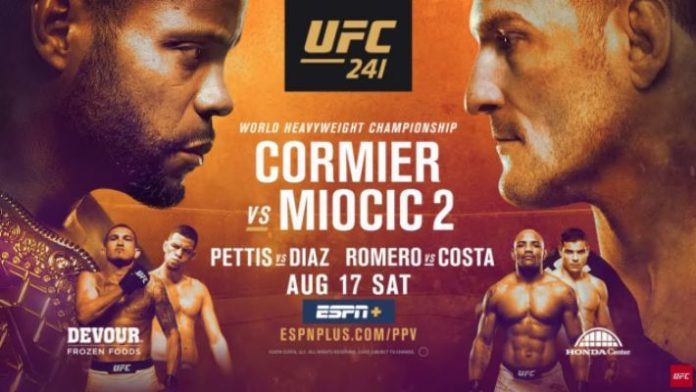 With the last week’s Mike Perry fight still trending the internet with bloodsheds, UFC travels to Honda Center in California this weekend for a fight which will be no less in magnitude as the UFC Heavyweight Champion Daniel Cormier looks to defend his belt against former champion and arguably the best UFC heavyweight of all time, Stipe Miocic, in the main event. The co-main event will feature the best of welterweight division as Anthony Pettis welcomes Nate Diaz back inside the Octagon after being three years away, with last memorable pair of bouts with Conor McGregor in 2016. This fight card also features Yoel Romero, who is renowned for his incredible build and elite wrestling ability, taking on the surging Paulo Costa, who has climbed the UFC middleweight rankings, relatively faster, after a 12-0 start to his professional career.

After almost a year of facing each other inside the Octagon at UFC 226, the two UFC Heavyweight division legends, Daniel Cormier and Stipe Miocic will meet again this weekend at UFC 241 to fight for the Heavyweight Title. Only this time, entering in opposite roles.

Daniel Cormier has accomplished nearly everything in UFC with a 22-1-1 career record and is part of an elite group of fighters that have held two UFC belts at the same time in two weight classes simultaneously. Daniel Cormier victoriously claimed the heavyweight title last summer with a stunning short right hand out of the clinch that landed a sharp knockout blow to then heavyweight champion, Stipe Miocic. While he is renowned for being an elite wrestler, ten of Cormier’s victories have come by way of knockout. While speaking to the media before UFC 241, Daniel says “I feel great. I’ve trained hard, my body feels great. I haven’t felt this good in a long time. I think this fight will be much more difficult than the last time. I believe that his (Miocic) team of phenomenal coaches, will have made the adjustments that they need to make in order to make it a much more competitive fight. But, if he underestimates my punching power, it’s a little bit his fault. We’re fighting in heavyweight division and at heavyweight, anybody can knock anybody out. It only takes the right shot.”

Stipe Miocic is arguably considered one of the greatest heavyweight fighter within the UFC heavyweight roster and has successfully defended his UFC heavyweight title for two years before his 2018 loss to Daniel Cormier. As the title holder of the heavyweight division before 2018, Stipe had successfully overseen the likes of Fabricio Werdum, Alistair Overeem, Francis Ngannou, and Junior Dos Santos while defending his title three times in a period of almost two years. He holds a record of 18-3 in his MMA career and all of Miocic’ s wins have come via knockout or decision. Addressing the media ahead of UFC 241, Miocic says, “It was going good for me the last time I face Cormier but then he was lucky to win the lottery. I hate losing, so that right there just motivates me more, I have a chance to get my belt back, and I want that belt. I think it’s just a little bit more than the belt now, too. I want to prove I’m a better fighter, which I know I am. That’s why I wanted the fight. That’s the reason I want the rematch more and now I have finally got it.”

In the co-main event, Nate Diaz will make his highly anticipated return to action after three years away from the Octagon to face Anthony Pettis in a pivotal Welterweight match-up. It will be interesting and exciting fight for fans to witness as both of them finally get locked inside the Octagon with a sole motive of catapulting themselves back into the mix for another major fight in the Welterweight division later this year. Anthony Pettis is a former lightweight champion and is not only a world-class kickboxer but one of the most creative fighters to ever step inside the Octagon. Pettis will use all facets of the cage to his advantage — including launching himself airborne if that’s what is needed. Nate Diaz on the other hand is a former TUF winner and when at his best, he is known for his elite submission moves, with 12 of his wins coming by this method.