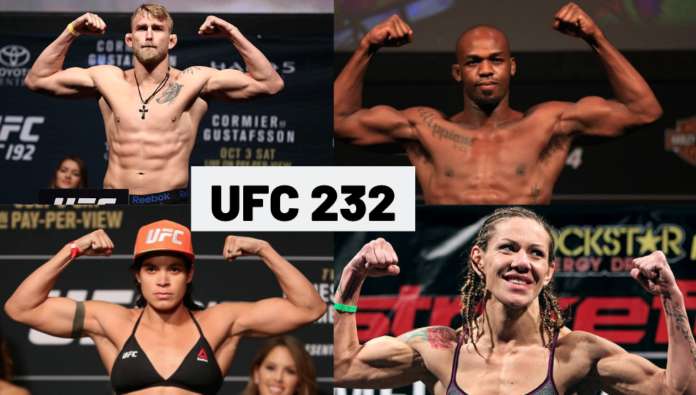 The UFC ends this year in the most fitting manner possible as a rematch between Light Heavyweight ex-champion Jon Jones and former two-time title challenger Alexander Gustafsson headlines UFC 232. The two combined for an epic title fight at UFC 165 back in 2013. In the co-main event, Featherweight champion Cris Cyborg takes on Bantamweight champion Amanda Nunes. This will be the first ever champion versus champion fight in the history of the women’s divisions in UFC.

The Battle for Supremacy –

Back in 2013, Gustafsson gave Jones all he could handle at UFC 165, however Jon “Bones” Jones pushed through the toughest adversity of his career to ultimately defeat the Swede via unanimous decision.

Jon Jones enters this fight with a 23-1 record and has won 42 percent of his fights by knockout. Jones has a high level takedown rate and is always a threat to land vicious kicks. When asked about his 11 match unbeaten streak Jones replied, “High level fighting is my comfort zone along with fighting for championships day in day out. No fight is a big fight and it’s just a fight. I have been doing this since I was 23 years old and it’s always been exactly the same, To Win”

With no clear weaknesses, the only question mark surrounding Jones is his time out of the octagon, as he is fighting just the third time in nearly three years. Jones said “the last time I was out for a year I came back and knocked out the so-called greatest fighter ever, Daniel Cormier. So I have no doubt in my abilities, my training, my team, my layoff. I have no losses on my record so I am just going to go and be myself.” Jones has not only served his suspension but is also right back in the title picture at 205 pounds.

Alexander Gustafsson enters this fight with a 18-4 record and has won 61 percent of his fights by knockout. “The Mauler” has been waiting for this opportunity ever since he felt he should have earned the decision win first time around in a razor-close fight back in 2013.

The Swedish contender is coming off one of his strongest performances to date when he destroyed Glover Teixeira last year and now will look to become the first person to hand Jones a legitimate loss in his incredible career. When asked about the significance of this match, Alexander said “This is a big fight I’ve been waiting for a very long time and I have been training for fights like these my entire life. This will be me beating the best guy out there that’s never been beaten and take his place. So, it’s the biggest thing for me right now.”

There may not be a better matched fight in UFC than Jones and Gustafsson facing each other again at UFC 232.

Cyborg could be considered the best pound-for-pound women’s fighter in history as she holds an incredible record of an undefeated streak since Strikeforce, Invicta FC and now the UFC. She also holds wins over UFC’s well-known fighters like Tonya Evinger, Yana Kunitskaya and former women’s Bantamweight champion Holly Holm. Cyborg is coming off a first round knockout victory against Yana Kunitskaya earlier this year at UFC 222 and is now 5-0 under the UFC banner. Cyborg has produced knockouts in all but one of her fights since 2009. When asked about fighting Amanda Nunes, Cris said “I always take every opponent very seriously. Amanda is a very good athlete and a champion at 135.

Cris Cyborg specially mentioned about her dream of having a boxing fight. She wants to do a lot for women MMA which can grow into women boxing, a transition which could be clearly seen in the men’s division when McGregor faced off with Mayweather back in 2017.

Amanda “The Lioness” Nunes is making the move up from the Bantamweight division to the Featherweight Division. Amanda Nunes has looked unbeatable in her most recent fights while winning and then defending her women’s Bantamweight title. She holds wins over Miesha Tate and Ronda Rousey and now she’ll look to add another legend to her resume when she moves up to featherweight to face Cyborg. During the press conference, Amanda Nunes was quick to point out that Cris is the best in her division and this fight will put her onto another level. This same thing happened at UFC 200 against Ronda Rousey

The Lioness is set to face the one elite competitor of the era that Rousey didn’t fight, and it gives Nunes an opportunity to further establish her superiority within the UFC roster.