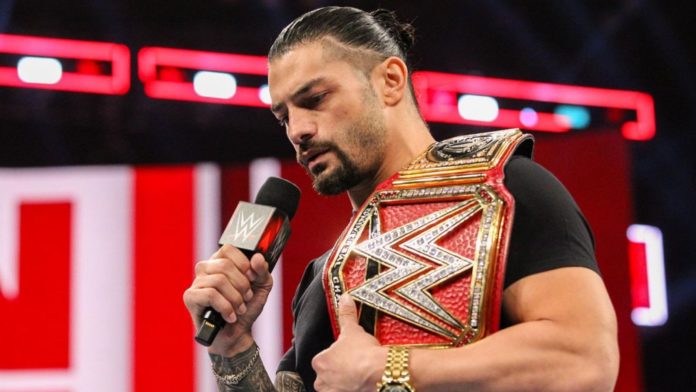 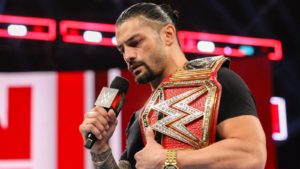 Last evening on Monday Night RAW, Roman Reigns was forced to surrender his Universal Championship as he revealed that his battle with the Leukemia had returned in his personal life.

Roman was diagnosed with the disease 11 years ago and he fought through it before launching his professional career on the WWE developmental territories. It was an emotional night for the ‘Big Dog‘ as he issued an apology for not being the fighting Champion the people wanted him to be.

After the conclusion of his speech, Reigns laid down the title and exited the ring with resounding ‘Thank You Roman’ chants and was greeted by his Shield Brothers Dean Ambrose and Seth Rollins on the ramp. The trio hugged for one last time on WWE Television while Rollins was left in tears.

.@WWERomanReigns has to relinquish the Universal Championship due to a battle with leukemia. #Raw pic.twitter.com/EhomllNwjK

.@WWERomanReigns has officially relinquished the Universal Championship on #RAW. pic.twitter.com/Dov281qW94

#ThankYouRoman we all know your gonna be that fighting champion throughout this, we are all gonna support you through this, 🙏❤️ #RAW pic.twitter.com/QRwWzkeWw6

EXCLUSIVE: Moments after announcing that his returning leukemia has forced him to relinquish the Universal Championship, @WWERomanReigns is met with an outpouring of support backstage. #Raw pic.twitter.com/JRv0iYLILJ

Strongest thoughts and wishes with @WWERomanReigns – no one stronger and no one more capable of beating this. #ThankYouRoman

Thank you Roman 🙌 my love and prayers go out to you and your family 💜 we are with you!

About to board my flight to Newark and hearing news about my #GoodBrother and one of the hardest working, strongest brothers I know @WWERomanReigns , got a pit in my stomach.
My family throwing so many prayers at you..
Love you bro.

You’re our Universal Champion. We are with you every step of the way brother.

If there's anyone that can beat this, it's @WWERomanReigns. Thank you for everything. @WWE

Roman is one of the nicest people I’ve ever had the privilege to share a locker room with. We all knew he was the locker room leader and we all aspired to be like him. Come back stronger than ever my friend #ThankYouRoman @WWERomanReigns

He IS the business.

You got this, champ. #ThankYouRoman

I’ve said it for a long time! @WWERomanReigns is the best wrestler on the planet! #ThankYouRoman #RAW

I'm overseas and I just heard the terrible news about @WWERomanReigns and his battle with Leukemia. Totally shocked. Uce, you are a tough bastard and a true fighter, and you will beat this.
Lots of love.

Our job gives us the ability to portray larger than life characters who possess super human qualities and characteristics.

After hearing his story it's very apparent that Joe Anoa'i is just as much of a superhero as "Roman Reigns" is.#ThankYouRoman

Just saw the @WWERomanReigns news. Absolutely heartbreaking. Roman is one of nicest guys I have ever met in this business and was a pleasure every time I had the pleasure to work with him. My best wishes to him!

We been here for u, and will stay here for u. Day one uce. We love you. @WWERomanReigns #ThankYouRoman pic.twitter.com/eszthQWPAC

‘Courage – strength in the face of pain or grief.’ You have given us your everything including a courageously vulnerable moment. We, your WWE family, give you all of our love and support. #ThankYouRoman #NeverGiveUp

Fight on to victory my courageous brother! pic.twitter.com/wuYAoxa48p

#ThankYouRoman for being a huge source of inspiration and wishing you a speedy recovery.

My thoughts & prayers go out to @WWERomanReigns & his family. Breaks my heart but praying & believing for a speedy & full recovery.

Sending so much love to @WWERomanReigns and his family. You’re one of the strongest dudes I know and I can’t wait to see you back inside that ring. ❤️ #thankyouRoman

Friend, you have my prayers and your family is your greatest support!! This will pass and you will come back stronger than before. Your health is what matters!! Take care of you!🙏🏻 pic.twitter.com/dcbp7fSusc

Fighting leukemia is tough,
But they don't make them tougher than @WWERomanReigns
He will beat this again #ThankYouRoman

A champion transcends any company. @WWERomanReigns, on behalf of NJPW we all wish you a speedy recovery.

Still can’t believe it! So much love for @WWERomanReigns #RomanReigns love these pictures so much ❤️😢 pic.twitter.com/UdQVqJvDeA

I’m certain if I’d have had leukaemia at 22 that I wouldn’t have had much fight, even if I’d beaten it. That’s some serious mental toughness from @WWERomanReigns; living with something so big AND getting to the top of the wrestling business #ThankyouRoman

@WWERomanReigns My Family And I Are Thinking Of You And Are Keeping You In Our Prayers! We Are Here For You! 🙏🏻🙏🏻🙏🏻

I’m heartbroken. All my love and well wishes to Roman Reigns and his family

…. He will fight, he will win, he will return stronger, and I will be waiting….

Just want to say that was a wonderful speech by Roman Reigns and I hope everyone says more than a few prayers for him.