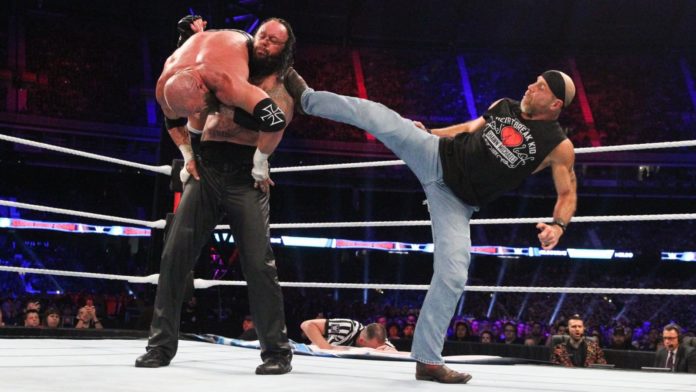 WWE’s trip to The Great Southern Land turned out to be eventful. A vocal crowd of over 70,000 were in attendance to witness the spectacle at Melbourne Cricket Ground in Melbourne, Australia.

The night started with The New Day and Becky Lynch retaining their titles, while hometown heroes Buddy Murphy and The IIconics sealing a victory. Buddy Murphy dethroning Cedric Alexander to win the WWE Cruiserweight Championship arguably received the loudest pop of the night.

John Cena returned to action debuting a new hairdo to team-up with Bobby Lashley and took on the duo of Elias and Kevin Owens. AJ Styles too retained his title after a tense encounter with Samoa Joe. The much-awaited match of Daniel Bryan vs The Miz ended in a quick abrupt fashion as WWE’s resident YES! man picked up the victory with a small-package which seemed like a nice callback to Bryan’s Mr Small Package gimmick of his early days in the indies.

While in the main event, The Game got over The Phenom in their “last ever” encounter. The Brothers Of Destruction laid out Triple H and Shawn Michaels post-match to end the event.

Let’s see how the Twitterati and the Superstars reacted to Super Show-Down:

When you forget to save your work and Word crashes #WWESSD pic.twitter.com/alUDaU5s1v

john cena after reading the tweets about his hair pic.twitter.com/PcQHHBLlJx

I’ve traveled the world as the @WWE Champion, defending it has been my life. I came to Australia to do just that… Joe tried to mess with a man’s family. Now I’m going to make sure he won’t be the same next time he sees his. #WWESSD #AndStill

When one chapter ends, another opens.
I’ll see you in Saudi Arabia, @WWEDanielBryan. #ThePhenomenalvsTheYes#WWECrownJewel

@CedricAlexander was the Best in @WWE205Live – But I’m better than the Best! The #AgeofAlexander is now extinct like the dinosaurs! #AndNEW #WWESSD pic.twitter.com/OU0ZPCaYEF

That's… that's not how an armbar works but okay#WWESSD pic.twitter.com/jAJrnKTtuQ

EXCLUSIVE: @RondaRousey pulled off her first double armbar with EASE at #WWESSD! pic.twitter.com/IRoWnuwmlg

When your phone battery hits 1% and you left your charger in the other room #WWESSD pic.twitter.com/mPo8KhcFcn

Asuka needs a massive reset button, turn her heel. I hope this meaningless feud is over. Seeing her dancing with Naomi was absolutely cringe. How can creative ruined this woman, is mind boggling. Her mystique and her intensity is all gone. At least she didn’t take the pin.#WWESSD

The 🤝 is on a whole other level.

a DOUBLE ARMBAR FOR ROWDY RONDA ROUSEY AND THE BELLA TWINS TO WIN #WWESSD pic.twitter.com/4EvKGdyHST

This just means the world to us! Thank you! 🙏 https://t.co/gfGmeNWoKC