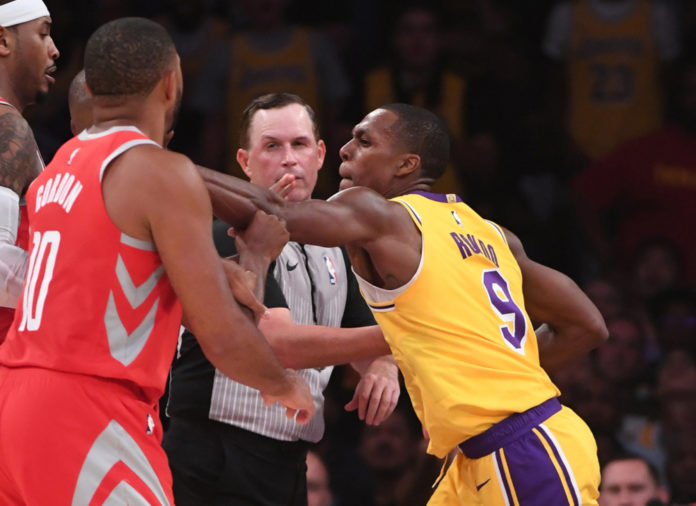 The sport of Basketball today took a big black eye after a wild brawl erupted between Houston Rockets’ Chris Paul and Los Angeles Lakers’ Rajon Rondo at the Staples Center in Los Angeles.

It began after James Harden was fouled while driving the lane by Brandon Ingram. This led to Ingram being upset with Harden afterward, so he shoved the reigning MVP.

As the two began to exchange words it was Paul who put his hand in the face of Rondo and pushed him away, only for Rondo to retaliate with a flurry of punches. 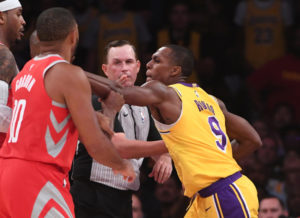 A left hook from Rondo landed clean before Paul got his own back with a right hand that looked like it hit flush on the face of Rondo.

Brandon Ingram wasn’t done and rushed back into throwing wild punches before the wild altercation was broken up by the officials and security.

Once it all calmed down and the teams were separated, the officials looked back over the footage before ejecting Ingram, Rondo, and Paul.

Chris Paul, Brandon Ingram and Rajon Rondo have been ejected after throwing blows in L.A. pic.twitter.com/s28TT81eys

Sources: Lakers officials watched tape and are backing Rajon Rondo’s contention that he didn’t spit on Chris Paul. Meanwhile, CP3 and Rockets are insisting that Rondo did spit. “Lot of history between them,” one source connected to both players says.

This led to Brandon Ingram, Chris Paul and Rajon Rondo all being ejected

.@RajonRondo and @B_Ingram13 both swung on @CP3! @FloydMayweather not impressed. Next time you guys are going to throw down let me know, I’m game.

Chris Paul was still so angry after the game, multiple individuals said, because a member of Rajon Rondo's family made "inappropriate" comments to Paul's wife, Jada, in the stands after the altercation.

Lakers may lose the game, but Rajon Rondo won the fight against Chris Paul. Brandon Ingram shouldn’t have got involved in a one-on-one fight though. pic.twitter.com/Iw9N2D8l9r

Rajon Rondo claims he never spit on Chris Paul. Lakers officials and Rondo looked over tape and did not see a spitting incident, per Woj.

Lonzo Ball: “It's the NBA, people ain't really going to fight. I ain't trying to get no tech."