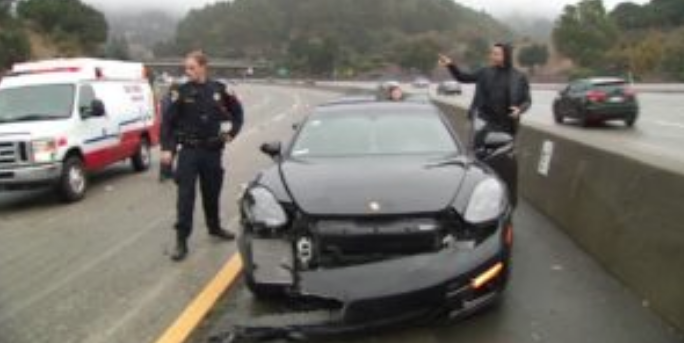 Golden State Warrior’s star player Stephen Curry was involved in a three-car crash on a California highway Friday morning. However, good morning for basketball fans as he was injured in this incident.

The accident happened after a driver of a Lexus lost control and crashed into Curry’s black Panamera Turbo S Porsche which costs over $185,000 on Highway 24 in Oakland, California. 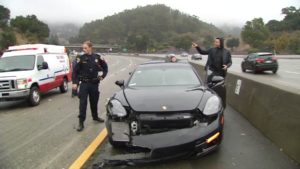 After the collision, Curry reportedly stopped in the centre median to wait for help. About 10 minutes later, while he was still stopped, the driver of a black Honda lost control of their vehicle and smashed into the median, colliding with a concrete wall and then into Curry’s car according to California Highway Patrol Officer Herman Baza.

Twitter was initially shocked to learn about Curry’s accident, but later relieved when it was found that he was unharmed.

Steph Curry's car crash happened on the way to shootaround, which is now open to reporters. He's in facility, fine…but still not available tonight vs Blazers because of groin strain.

Steve Kerr on Steph Curry's car accident this morning: "He's fine…I think he has another car he can drive."

imagine hitting a car, leaving yours to get insurance info, and out comes steph curry https://t.co/Q3LtKTTf1H

Breaking: @warriors star @StephenCurry30 got into a car accident this AM along Hwy 24 in Oakland. The good news: he’s ok. The bad news: his Porche isn’t. Just spoke to his dad who is here too. Tells me Steph is doing fine. Curry is still recovering from a groin injury pic.twitter.com/m58eZqjKyD

Warriors star Steph Curry walks away unscathed from back-to-back car accidents after a driver sped out of control and crashed into his $185,000 Porsche then someone ELSE rear-ended him 10 minutes later while he waited for help pic.twitter.com/1np4cCDAwz

This is insane. Prayers up for Steph Curry 🙌 https://t.co/JvzjraC4m4

Glad Steph Curry is safe and sound after car accident this AM on rain-slick hwy. Whew. Pic via @CHPoakland. They put out reminder that wearing seatbelt prevents serious injury. #StephenCurry #WarriorStrong #DubNation pic.twitter.com/3xqj1UhS2m

I really can’t imagine what I’d do if I got in an accident and saw Steph Curry get out the car I hit.

Steph Curry’s car was hit twice during an accident in Oakland this morning. Steph is okay. Prayers up. 🙏

My 89 yr old grandmother just called me to say she heard @StephenCurry30 was in a car accident and asked if he and his family were okay. I assured her that all was alright, and then getting off the phone, she yelled out to whomever was listening at her senior home “He Is Okay!!”

At the same time, I just heard about Steph Curry's car accident. Honestly, that's scary because he's been winning and he was in Porsche. God's watching, Stay blessed. I'm happy to hear that he's still alive. Definitely have to be careful. Every choice is a choice. pic.twitter.com/1erbC2FHqe