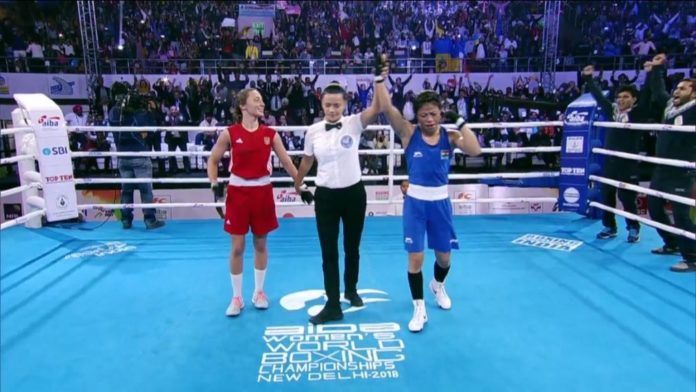 Mary Kom defeated Ukraine’s Hanna Okhota 5-0 to win her sixth World Championships gold. The previous record of the most number of gold medals in Women’s World Boxing Championships was held jointly by the Olympic bronze medallist and Ireland’s Katie Tylor, who had each won five gold medals.

This gold medal ensures Mary is now equal with Cuban legend Felix Savon, who too has six gold medals to his name.

The living legend showed no mercy towards her opponent who came a tad short despite her spirited performance. Later in the day, Sonia Chahal lost to Germany’s Ornella Gabriele Wahner to settle for a silver medal in the 57kg category.

The Twitteratis heaped praise on Mary Kom’s aggression and the gutsy performance of Sonia despite it being her debut major tournament.

CONGRATS to @MangteC for the GOLD in Women's World Boxing Championships in 48 kg category!

With this, she hs become the FIRST EVER female boxer to win 6 World Championships!

A fabulous achievement by a wonderful athlete! Wt a proud day for us all! #MaryKom pic.twitter.com/kd12D8Ii4T

Magnificent Mary beat Ukraine's Hanna Okhota in a unanimous 5:0 decision in the finals of 48kgs at #WWCHs2018 🇮🇳

And thank you for continuing to do what looks impossible. You are the role model this country deserves! #MaryKom #Champion pic.twitter.com/akeH73XJnf

When was the last time we heard of any serving Member of Parliament inspiring like this in the Sports arena. I am not talking about retired stars becoming MP. And not just in India, but across the globe. Would be interesting to know. https://t.co/9Al9EICuQc

Congratulations @MangteC didi on winning historic 6th World title. More power to you. We all are proud of you.👍 #PunchMeinHainDum #MaryKom

Congrats and salute to #MaryKom on her 6th gold in world boxing championship 💪🥊🥊 pic.twitter.com/moxIlVPlHY

Hearty congratulations to Ms.Mary Kom @MangteC for creating history by winning the 6th gold medal at the Women's World Boxing Championship. She is an inspiration to every Indian. Wishing her many many more victories. #MaryKom pic.twitter.com/cRepnl4xyw

What a great record by #MaryKom in World Boxing Championship pic.twitter.com/NFpt5KAN9E

Superstar #MaryKom wins gold & dedicates it to #India.
Next story idea for Leftie rags:
Is national pride a sign of insecurity within the North Eastern identity?

On the men's side, only one man had done this feat of six Golds (Felix Savon) till date.

Proud of you, Mary! pic.twitter.com/0AjSNWO3in

An epitome of a inspiration!
Mhaari Chori- The Magnificent Mary.
Thank you for adorning our Motherland once again with Gold🌟! ❤️ #MaryKom pic.twitter.com/pGFZh30zUR

In a nation where people watch mobile phone unboxing more than Boxing, this achievement needs to be highlighted even more!#MaryKom you champ! pic.twitter.com/ZQSLrC2zcM