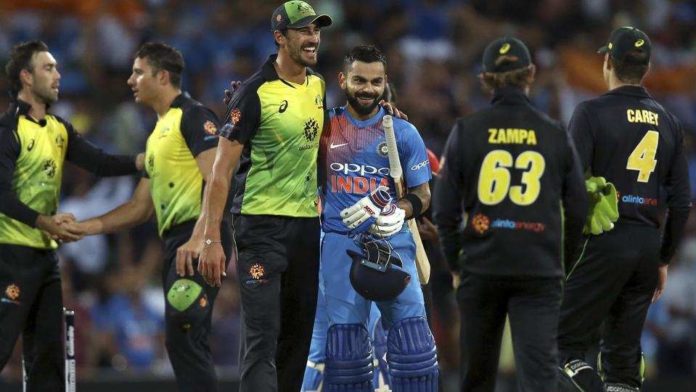 In a dominant chase by Virat Kohli in the 3rd T20 match against Australia, where he scored a 61* from 41 deliveries, India beat Australia by six wickets in the third T20I at the Sydney Cricket ground to level the series 1-1.

Shikhar Dhawan and Rohit Sharma managed to provide a decent start for the successful run chase as Dhawan scored 41 in 22 deliveries before Mitchell Starch dismissed him, while Sharma scored 23 in 16 deliveries before getting dismissed by Adam Zampa. While Kohli reached his 19th T20I half-century off 34 balls and took India to victory with two balls to spare. 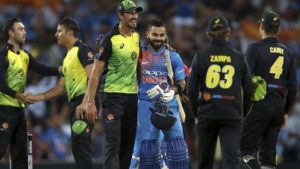 Kunal Pandya dominated from the bowling side as the all-rounder managed to get four wickets while giving away 36 runs in his 4-overs.

Twitter went frenzy over a dominant run chase by the Indian side and showered praise on their star Virat Kohli.

Media: Nice win
Virat Kohli: Credit goes to Dhoni
Media: But he was not even in the team 🤔
Virat: Exactly 😆#INDvAUS

Virat Kohli has remained Not Out 14 times when chasing in T20Is and India won the match every time. #IndvAus

Superb innings from @SDhawan25 at the top and @imVkohli remains unbeaten in a run-chase, and when that happens India invariably wins. Congratulations India on the win today #AUSvIND

You get the feeling @imVkohli is going to be the difference between the 2 teams over the new few weeks ….. #AusvInd

India go on to square the series in the final T20I and it's captain Virat Kohli once again to the rescue. Quite excited for the Test series which is going to be the real battle. 🇮🇳 #AUSvIND pic.twitter.com/GIejpqhvhX

Virat 'The Chaser' Kohli does it again, ending 61* from 41 balls as India chase down 165 with just two balls remaining. What a knock from the skipper!#AUSvIND SCORE 👇https://t.co/vuuqcrYXlw pic.twitter.com/0IlDYZRdZ2

No. of Dinesh Karthik remained unbeaten in chases – 9 times
No. of times India won – 9 times#INDvAUS

Dinesh Karthik is by far the most improved/adaptive player in Indian Cricket in recent times. Massive finishing skills.#INDvAUS

That is the very reason why @DineshKarthik is in the side. Played with such calmness and took the pressure off so easily batting at the other end. Excellent Knock. No surprises to the way @imVkohli played today. Signs of what's to come from the King this tour #INDvAUS

Great to see this guy and everyone else stepping up together. 💪🏼 On to the Tests now! ✌🏼 @imkuldeep18 pic.twitter.com/OES174LSvk