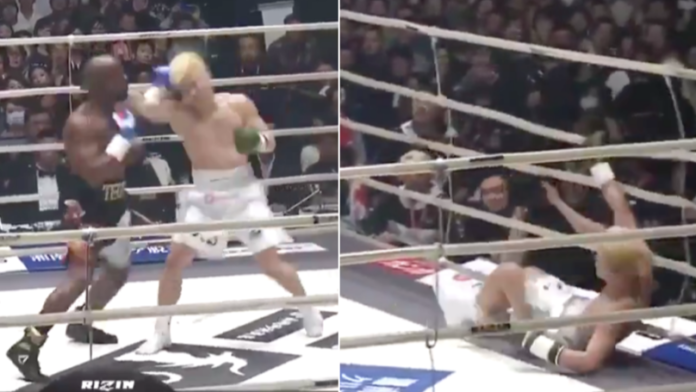 Floyd started the fight just tossing his arms in the air and then Tenshin threw a left hand that kind of clipped him. Floyd then just destroyed him. Walked through his punches andjust knocked him down repeatedly until Nasukawa’s corner saw enough to throw in the towel. 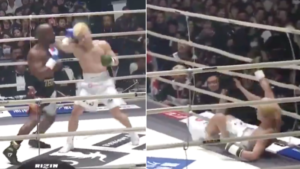 Nasukawa was in tears in his corner after defeat, but Mayweather praised his efforts in a humble post-fight interview.

Floyd Mayweather just got paid millions of dollars to destroy Tenshin in less than a round. The greatest businessman in history. #Rizin14 pic.twitter.com/a5rzupGaJq

Floyd Mayweather def. Tenshin Nasakuwa in the first round. Mayweather knocked him down 3 times in 2 minutes and then Nasukawa’s corner threw in the towel. Mayweather toyed with him throughout. Was never in danger and danced when the fight was over.

🎳 Floyd Mayweather has just knocked out Tenshin Nasukawa in the first round after three knockdowns. He just went Tenshin bowling.

He's knocked him down three times in the first round – and the fight has been stopped after just two minutes. pic.twitter.com/WBJ7gtr5sc

Floyd just laughing off Tenshin's punches. That was fucking bizarre. That was a full on fight.

Tenshin is so small his punches do nothing to Floyd. Floyd drops him twice in the first.

I think this highlights how well Conor McGregor did against Floyd. Say what you want about the fight, but the man landed several good shots on perhaps the most elusive fighter of all time. #RIZIN14

I need more Floyd freakshows ASAP. I didn’t appreciate him enough when he was around.

"It was supposed to be an exhibition."

Thanks Floyd. Thanks for coming in here and shitting on our nice things. #RIZIN14

These guys are onto the conspiracy where RIZIN has their biggest star take the fall to Floyd. https://t.co/vxfrQlCHae

A lot people are saying the fight was a 'fix'. Why on earth would RIZIN shell millions of dollars to have their prized asset get starched with an audience of millions? The hell out of here with fix claims #RIZIN14

OK Floyd, so you're getting paid a lot for this, people have come to see a bit of a show, he's about half your size and has never boxed before, maybe just take it easy and move around… https://t.co/1jhTIiSKG7

#MayweatherNasukawa ends in the 1st round after multiple knockdowns by Floyd Mayweather. A ridiculous mismatch. pic.twitter.com/TxOj8JQSBP

🥊 Floyd Mayweather defeats Tenshin Nasukawa in the first round

Roughly around $64,700 per second he actually ended up fighting 😫😂 pic.twitter.com/eT5gDKYfIo

And to think some of you were entertaining the idea of Floyd Mayweather fighting Khabib Nurmagomedov in a boxing match a few months ago. Smfh. pic.twitter.com/rzHFN6kEOh

I don’t know who the best 122 pound Gréco Roman wrestler is in Greece but he just got put on notice. Floyd will punch that passport.

Floyd Mayweather knocks out Tenshin Nasukawa in the first round.

Nasukawa knocked down three times in 2 minutes and his corner threw in the towel. #RIZIN14