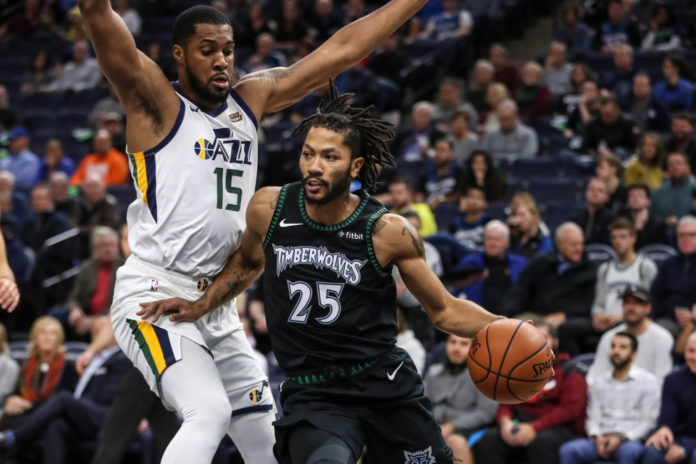 Derrick Rose emerged as the star of the night, as the MVP veteran racked up career-high 50 points in a spectacular showing in Minneapolis against the Jazz. He scored 50-points in the final seconds of the game as Minnesota edged out the visitors 128-125.

The whole crowd was in support of Rose as the ‘MVP, MVP, MVP’ chants were heard inside the arena. After the game, he was immediately swamped by his teammates and broke down into tears at the bell. 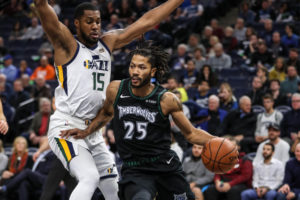 “I worked my ass off, bro. I went and did this for the franchise, the organization, the fans, everybody man,” Rose said after the game, revealing the performance meant “everything” to him.

Twitter came together in support of the MVP and poured love for the emotional Derrick Rose.

An emotional Derrick Rose explained what his 50-point game meant to him.

"Everything, man. I worked my ass off…" pic.twitter.com/X3xZ76VvRQ

Glad I didn’t find out about Derrick Rose’s 50-point game when I was driving cuz I would have crashed.

Derrick Rose has been looked over, left for dead, buried, forgotten. Most who've reached his heights & bottomed out would've given up in shame. He contemplated it but persisted. Now has the most unexpected, unlikely but hard-earned 50 we've probably ever seen. Don't quit, kiddos

At 30 years and 27 days old, Derrick Rose is the oldest former MVP in NBA history at the time of his 1st career 50-point game.

The previous mark was held by Oscar Robertson, who did it at age 26 in 1964. pic.twitter.com/2UBKZMzE8H

LeBron, watching Derrick Rose score 50 points a year after his team gave him away pic.twitter.com/p1YPtynlRY

Fairytale night for Derrick Rose. Scores a career-high FIFTY, blocks last-second 3 to tie. Mobbed by teammates, breaks down in tears. Down 2 starters including Jimmy Butler. "Most I ever talked to my teammates," he said of floor generalship. MVP flashback in throwback jersey.

😢😢😢
DERRICK ROSE CRYING AFTER DROPPING 50 IS THE MOST INSPIRATIONAL THING I'VE SEEN IN A WHILE. HE IS A LEGEND. NEVER GIVE UP. 🔥🔥🔥 pic.twitter.com/vRkAnidmdA

Derrick Rose’s 50-point game can’t happen tonight without Jimmy Butler teaching him how to be a winner.

"When you talk about perseverance, that's the true definition of it."

"I just want to win" Derrick Rose has been through so many struggles and so many low points in his life since his MVP season. But the man never gave up, has worked his ass off to come back from every injury and tonight, FINALLY, hard work paid off.. pic.twitter.com/P4fpzrNsbw

LeBron’s stern warning to teammates: Don’t be around when my patience runs out