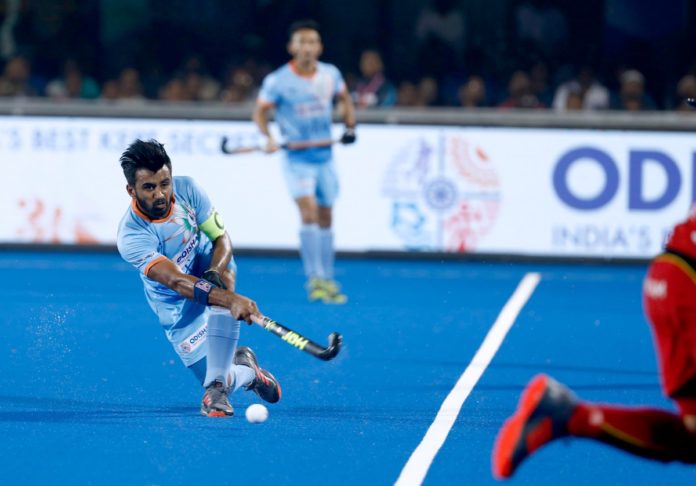 At the first half of the game, the Belgium side totally dominated in the first half with their crisp game. They looked like a level above the Indians in terms of skills.

In the first quarter, at the 8th minute, the Belgium side got the first goal in the form of Penalty corner conversion by Alexander Hendrickx as he struck the ball in the middle of the goal. 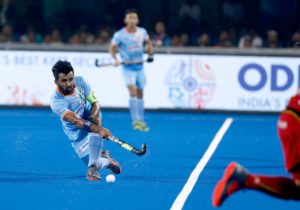 The third quarter saw India starting aggressively and started hitting more accurate shots at the goals and turned up the heat, and at the 39th minute, India earned a penalty corner which was converted by Harmanpreet Singh. It was a much-needed equaliser by the Indian side.

The fourth quarter saw both teams starting off aggressively. Indians were holding their lead smartly. They were making sensible passes and the defence was on point. In the 47th minute, Simranjeet Singh scored his third goal of the tournament courtesy of a brilliant pass from Manpreet Singh. Indians were now leading for the first time in the game.

Twitter enjoyed the hard-fought between the two giants from the Hockey world.

Strong Comeback By India In 2nd Half Coming From 0-1 Down To 2-1. That Last Goal From Belgium With 4 Mins From Finishing Time Ended The Match In A Draw.

What a game….At the end of first half We thought it is very difficult to stop these European team….but Indian Team proved us wrong at the end of march…… Well played India….#INDvBEL #HockeyWorldCup2018 @thefield_in

What a GREAT MATCH! The Indian men battling it out on the field to level the game with a 2-2 score! Good job boys! You played like real heroes 👏🏻👏🏻✌🏻@TheHockeyIndia#INDvBEL #IndiaKaGame #HWC2018 #DilHockey

Here is how the crowd reacted to Harmanpreet's equaliser.

Belgium holds on to the one-goal lead in the second quarter. Their defence has been brilliant and India's have been brittle so far. An interesting half ahead! #INDvBEL #HWC2018

1-0 down against the Rio Olympic finalists to an inspired fightback leading 2-1 within a span of 15 minutes.

If cricket is our heart, then hockey is our lungs! – a placard at the Kalinga Stadium.🙏#HockeyWorldCup2018 #IndvBel

Men's World Cup Hockey🏑: Match betweeen India and Belgium ended in a draw 2⃣-2⃣ at Bhubaneswar in the group C clash of the event.#INDvBEL #HWC2018 pic.twitter.com/WWyai8krs6

#INDvBEL Such a soft late goal conceded by India once again! We were dominating! if we need to become better; need to capitalize on such situations

Ind vs Bel 2-2. Thats a very good result for India. Lion hearted fight back after being down 0-1 at half time and totally over run by Bel in the 1st half. Disappointing to again concede a late equaliser. But India was outstanding in the 2nd half. Well played #INDvBEL #HWC2018 pic.twitter.com/4QuTrOkBxT

Great win!! Incidentally even if India gets direct entry into Q.F. they will have to match up with either GER or NED from Pool D 🤔 #INDvBEL

Excellent match it was. I got goosebumps throughout the game. Even though the ball possession was not in our favor, we made a solid comeback in second half of the game. Good going India! Home crowd was overwhelming tonight!#INDvBEL @TheHockeyIndia #HWC2018

Wow! Draw against Belgium would give huge confidence to the players! Apart from Q1, rest of the quarters we had more possession then 🇧🇪 that was awesome to see. Common India! #IndvBel

What a great game this was. Battling performance from both teams #INDvBEL 💪 come onnn India

It's 2-2.. No worries, India played really well against a high ranked team… India needs to thrash Canada for Top position… All the best #INDvBEL

First time I watched hockey. It was very impulsive & energetic. Unfortunately it was a draw 🇮🇳 2-2 🇧🇪 #INDvBEL #HockeyWorldCup2018 pic.twitter.com/Ja9VIRHvwh