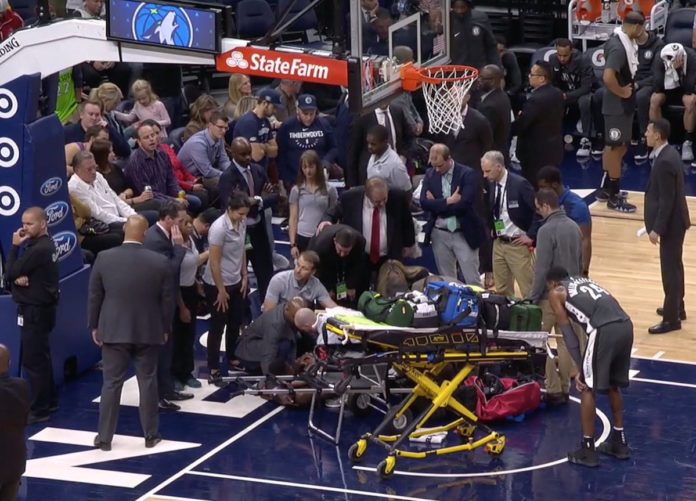 Brooklyn Net’s brightest young star Caris LeVert has suffered a gruesome leg injury while attempting a block during the Brooklyn Nets game against the Minnesota Timberwolves on Monday night.

The injury occurred with 3.7 seconds remaining in the first half of the game.  He was assisted out of the Target Center in a stretcher with a towel over his face to a nearby hospital and the whole fell silent. 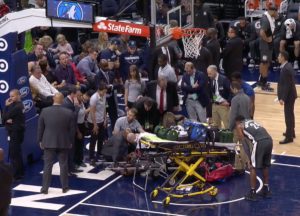 LeVert is one of the brightest players in the league and is referred by many as the ‘Baby Durant’. His Teammate Rondae Hollis-Jefferson was reportedly brought to tears at the sight of the injury.

“He’s the heart and soul of our program, so really tough blow,” head coach Kenny Atkinson told reporters. “I feel for him. He’s had a fantastic start to the season, has obviously made a huge jump. I just know Caris. If anybody’s coming back from this, the human, the character, the person, the player, he’ll come back from this.”

Twitter was shocked at the injury and prayers started pouring in for the young star from fans and numerous other NBA players.

Nets and Timberwolves players were visibly upset as Caris LeVert was tended to and carted off with an apparent right ankle injury. pic.twitter.com/VwAPTDHOqM

Sight of Caris LeVert's leg injury in Minnesota shook everyone on court. He has rapidly emerged into the cornerstone player of Nets rebuild — and been spectacular this season. He fought foot injuries at U of Michigan. He's been everything they've wanted in a young player.

Prayers out to @CarisLeVert!!! Been watchin him play this season and I’ve loved every bit of it! Hate to see him get injured 🙏🏾

Injury Update: Caris LeVert sustained a right leg injury during the second quarter of tonight's game at Minnesota. LeVert is being taken to a local Minneapolis hospital where he will undergo a full evaluation. Further updates will be issued as available.

God bless you youngin tough road ahead but we’re here to help lift you @CarisLeVert ! You know how to reach me 🙏🏾

Prayers up for @CarisLeVert ….was killing this year too smh 🙏

This guy has been hooping!! its so tough to see that happen… Prayers up for @CarisLeVert 🙏🏼 Speedy recovery bro!!

Literally sick to my stomach hearing the news about @CarisLeVert. Praying for you my brother 🙏🙏

It hurts that much more cause I know how much you put into it! God will bring you through, that I know! Love you brother @CarisLeVert ✊🏾

Do not watch the Caris LeVert injury.
Go out of your way to mute the words from appearing on your timeline.
I implore you.

I see you boy! @CarisLeVert

Prayers up for my guy @CarisLeVert. Hoping for a speedy and successful recovery. 🙏🏾

Prayers up for @CarisLeVert . Man was out there really serving daily 🙏🏽

Noooo!! Not @CarisLeVert … one of the hardest workers I know. Ughhh 🙏🏼🙏🏼

Not My Brother Please Pray For Him 🙏🏾 @CarisLeVert

Prayers up for my bro @CarisLeVert ! God has a plan for him! This is just a minor set back to major comeback!

Young Fella prayers to you! Speedy recovery and even stronger impact coming soon for sure! 🙏🏾 @CarisLeVert