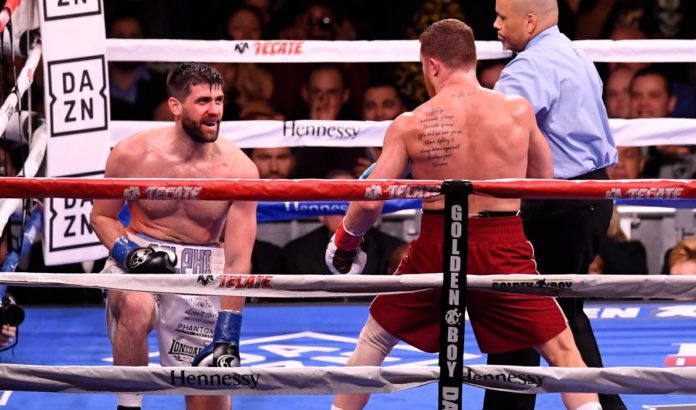 Canelo dropped Rocky in every round till the third where he dropped Fielding Twice and ended the fight at 2:28 of the third round with a brutal body shot after which the referee called off the fight. 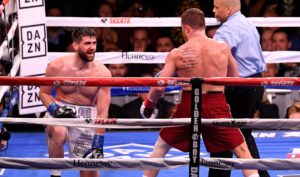 Canelo didn’t take any damage in the fight even though he walked through Fielding’s power punches, however, it was Canelo who was the better puncher as he dug hard shots to the body. He connected to the body on 35 of his 73 total shots landed, according to CompuBox.

Fielding had tremendous height and reach advantage over Canelo, but it didn’t mean much as the Mexican chopped down the Brits body round after round until the referee waived it off in the third.

Twitter was ecstatic seeing Canelo get a stoppage victory after nearly two and a half years, with his last victim being Liam Smith of UK back in September of 2016.

Here are the best reactions:

The doctor, showing body x-rays to Rocky Fielding after the fight with Canelo 😂😭. #CaneloRocky pic.twitter.com/B6ilwgr0Zc

Canelo fought at 168 before ggg pic.twitter.com/x5rd35rwtU

‘Lost a bit of respect for Rocky Fielding tonight. Went down too easy and should have been boxing Canelo on the outside. That would have been my strategy.’ pic.twitter.com/Rcs4VEXgK6

No surprises as Canelo stops Rocky Fielding in the 3rd.

Who do you want to see Canelo fight next? pic.twitter.com/V2NRwV13I6

Canelo got 33 million to pound Rocky Fielding on the ribs and get a WBA regular title, what a king

so GBP and DAZN are already planting their Canelo flag on the Mexican holiday PPV weekend in 2019….. #boxing

Well, I guess they won't have Jacobs challenge Canelo. They shook hands after Canelo's interview and Jacobs congratulated him.

The third and fourth knockdowns scored by @Canelo Alvarez in his third round TKO of Rocky Fielding. One was an overhand right, the next a left hook to the body like the first two #CaneloRocky #CaneloFielding pic.twitter.com/Zld0tToYBZ

Never seen someone look so happy to lose their world title 🤷🏽‍♂️

So we saw Canelo and GGG clobber each other for 24 rounds with their hardest punches and no one hit the mat. And then we see this. Shows how much better thise 2 are from everyone else. #boxing

Fielding is definitely tough and he at least entertained me in getting his ass kicked.

that was brutal canelo had a nice lil nick coming in..mofo aint care cause he knew

Canelo took no damage in this fight. Looks like he went into a average sparring session in there tonight

Over in the 3rd. Brave effort from Rocky, but as expected just came down to levels tonight.

And that’s it. Canelo steamrolls Rocky and finishes it in the third. I thought he’d win handily, but I didn’t know if it’d be that fast. Rocky had nothing for him. Didn’t fight tall or use his height/reach/size at all. #CaneloRocky

Its over.. Canelo knocks out Rocky Fielding in three rounds.

that was even easier than expected for Canelo. Fielding was road kill vs the 18 wheel Canelo #boxing

The Garden lit up white green and red for ⁦@Canelo⁩ and Mexico pic.twitter.com/P9GwyZDSJj