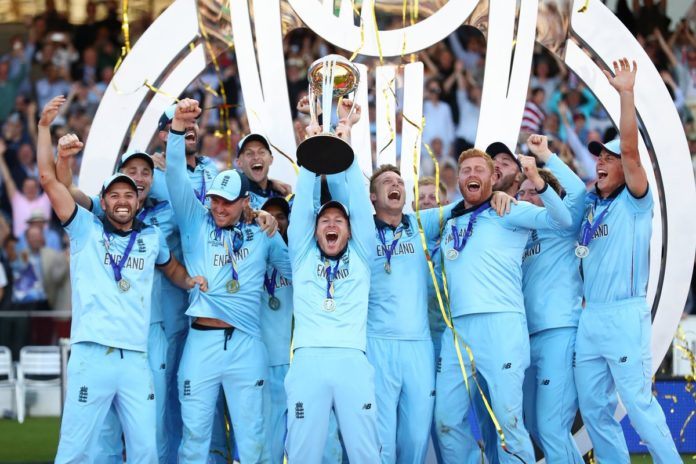 England has won the 2019 edition of ICC Cricket World Cup at the historic Lord’s Cricket ground in London. England beat New Zealand in the super over to lift their maiden world cup.

In the super over, England batted first and put 15 runs on the board with two boundaries. Chasing the target of sixteen runs, Martin Guptill and Jimmy Neesham opened for New Zealand and they started hitting right from the first ball. In the second ball, Neesham bought the Kiwis close to the victory as he hit a six over the cow corner boundary.

The team at the end needed 2 runs off 1 ball, and in the final delivery Guptill whipped away in front of deep square and comfortably completed the single, but as they were running for the second run, a perfect throw from Roy had Buttler knocks off the stumps. The match ended in a tie, but the England team were awarded the match for their superior boundary count.

Here’s how Twitter reacted to the wild World Cup Final:

Huge congrats England. World Champions (that has a nice ring to it) after one of the greatest games of cricket EVER!!!

I guess Piersy will take the credit for the great England win as he was in attendance. Normally he is a unlucky mascot @piersmorgan

A message from Her Majesty The Queen:

“Prince Philip and I send our warmest congratulations to the England Men’s Cricket team after such a thrilling victory in today’s World Cup Final.” (1/2) #CricketWorldCup pic.twitter.com/FEKsFFe40s

Neither Team deserved to lose that .. What a day for Cricket .. that is how it inspire a new generation of cricketers .. #CWC19

Hello @HBO. This is how you write a finale. #CWC19

Stokesy with a diving header to win the World Cup

This is why we go on about this sport. I know it's annoying. And I know we can't justify some of our reasons why you should watch it.

Tickets for Saturday’s friendly with Brentford are availab… NOBODY CARES RIGHT NOW GENTS WE JUST WON THE CRICKET WORLD CUP ON THE FINAL BALL OF A SUPER OVER.

So England are the first country to win World Cups in cricket, football and rugby.

TOLD YOU CRICKET WAS FUCKING AMAZING

Never seen anything like that. @englandcricket have won the World Cup. Cricket is coming home. 👏🏻👏🏻👏🏻👏🏻👏🏻👏🏻

In 40+ years of watching sport, I have never seen anything like that. Get cricket on free-to-air TV every week – now!

Two teams that have never won a World Cup.

Scores tied after the Super Over.

That is the greatest ODI that has ever been played. End of story.#CWC19Final

How incredible is sport 😳🤯

ENGLAND ARE THE WORLD CHAMPIONS!#CWC19Final

Glad I picked the Cricket over the tennis today. This final is unbelievable!

Sport at its scintillating, excruciating, wonderful best. Nothing like it.

I’ve no idea what the f*ck is going on but this is the greatest game of cricket I’ve ever watched and the excitement may kill me.

CWC 2019: Kane Williamson aspires for the support of Indian fans for the grand final