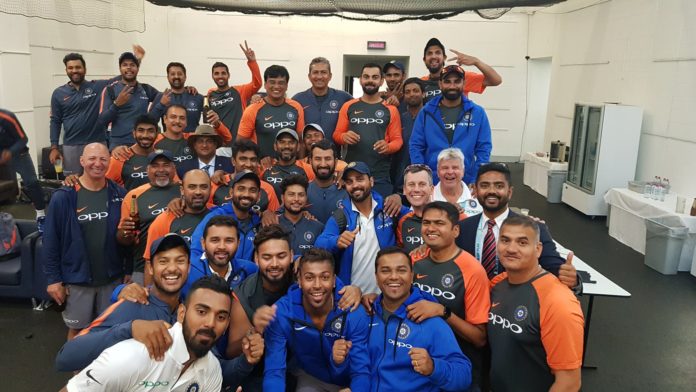 Twitteratis reacted after India sealed their first win at MCG after 37 years and went on to take a 2-1 lead in the series thereby retaining the Border-Gavaskar Trophy. 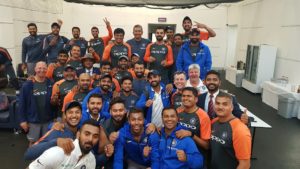 Team India scripted a historic win after they went on to beat the hosts Australia by 137 runs and take a 2-1 lead in the Domain Test series. It took the visitors only 27 balls on the fifth day to remove the final 2 wickets and seal the victory.

Jasprit Bumrah stood out for India picking up 6 wickets in the first innings and then following it up with another 3 in the second. Him aided by Shami and Ishant proved to be the instrumental factor in India’s dominant show at MCG.

Following this scintillating victory after 37 years at Melbourne, number of people took to twitter to congratulate the team for the performance they put up. Here are some of their reactions.

Incredible effort by #TeamIndia to take a 2-1 lead, especially @Jaspritbumrah93 who has played an instrumental role in this win. He has gone from strength to strength in all formats of the game. Definitely one of the best in the world today. #INDvAUS pic.twitter.com/vweoHd0nEE

Memorable win for #TeamIndia at the MCG. Great team effort and now we have an opportunity to create history at Sydney. Congratulations to each and every member of the team and to our domestic cricket where our cricketers enhance their skills. pic.twitter.com/osU6HHCSQl

#teamindia is in such great shape. What a deserving win Congratulations, all! Special mention @Jaspritbumrah93 what a solid performance. Couldn't have gotten better! INDvsAUS pic.twitter.com/YgHl3wuk7O

37 years 10 months ago was the last time India won a test at the MCG, none of the players from either sides were born. This win is one to savour & cherish for a long time and a perfect end to 2018 for Team India. Each player can be very proud of their contribution to this win👍

What an unbelievably amazing 18 months it has been as a bowling unit. @Jaspritbumrah93 is such a gem to Indian cricket. He has been Ably aided by Ishant, Shami, Umesh, Ashwin and Jadeja. Without doubt this is BEST we have had in a very long time. #AUSvIND

Congratulations @BCCI Very good win … and am glad they won !!!

Many congratulations for a fabulous win ,Team India. @RaviShastriOfc @BCCI

Most wins for India outside Asia in a calendar year in Tests:

Thanks @tdpaine36 @MacquarieSport for taking the time to chat with us. Good luck in Sydney lads. @cricketcomau . India too good in this test @BCCI https://t.co/PUXNpXTaEb

Nice that there’s still appreciation & room in the game for the “quiet achiever”;Jasprit Bumrah’s not far off becoming the “gold standard”. Pujara proving that those who critique his scoring rate don’t quite grasp his significance to an evolving India batting lineup.

Very convincing win from 🇮🇳 congratulations. For 🇦🇺 @patcummins30 was the standout 🏏

No.1 Test team for a reason 🥇🥇. #TeamIndia pic.twitter.com/kjPByn4rHq

A game of class and Top team effort🤘🏻 #teamindia🇮🇳♥️ pic.twitter.com/KVqRQ1U6Eh

What a feeling. Finally experienced a Test win at MCG for the first time after so many disappointments. Thank you boys! #TeamIndia pic.twitter.com/Y7yKeQnkEg

The inevitable has happened after the performance #TeamIndia has put in. A memorable win at Melbourne. Pujara and Bumrah have been exceptional but everyone has contributed to the win. Now to Sydney to create history. pic.twitter.com/bZxOPA50nW

Congrats #TeamIndia for a fabulous win over #Australia, for 150th Test victory..🇮🇳
It is a big moment and we are so proud! #INDvAUS #BoxingDayTest #Melbourne pic.twitter.com/cclOQm5TaT

Congratulations #TeamIndia on the historic Test win defeating #Australia by 137 runs at MCG #India is proud of all of you for retaining the Border-Gavaskar Trophy @imVkohli @jaspreetBumrah1 Ravindra Jadeja. It's a great win!

Historic win! Big 1st innings score put up by our batsmen & our bowlers finished the job well. We can with pride say this team has the most formidable bowling attack in world cricket currently. Congratulations #TeamIndia 💫#INDvsAUS

Thrilled to see India win and take 2-1 lead in the series Down Under! Loving the way #TeamIndia has been playing in this series and they are also learning from mistakes made in the past. Let us make it 3-1 in Sydney. #AUSvIND pic.twitter.com/6Phk8X0dC6