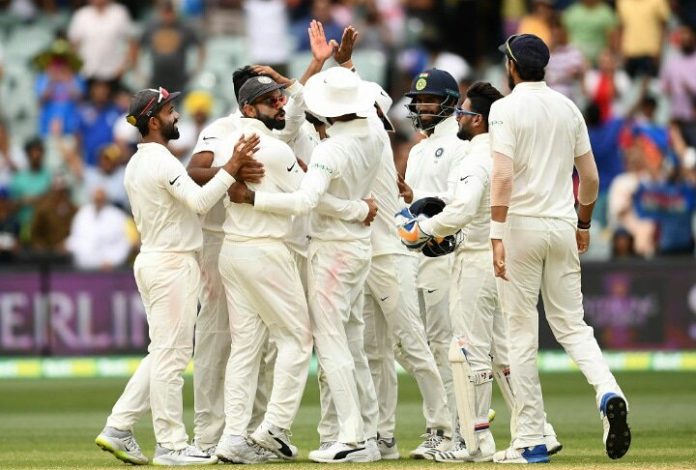 Everyone from former players to current politicians took to twitter to congratulate a historic win for India in foreign soil. 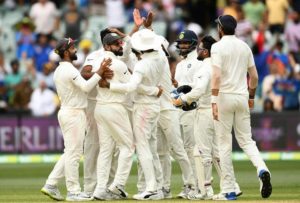 India made history at the Adelaide Oval on Monday to win their first-ever opening Test on Australian soil with the 31 run win. The pacers along with the spin maestro Ravi Ashwin stepped up their game to bowl out Australia in both innings and claim the victory.

In a game that saw Indian down and out right in the first session of the match, Cheteshwar Pujara kept the side in the game scoring a crucial century. The bowlers took it from there to take a 1-0 lead in the series.

The whole media was in awe of this Indian side that showed immense amount of patience and grit throughout the 5 days of play. Here are some of the tweets that congratulated India on this historic win.

We congratulate Virat Kohli for becoming the first Indian captain to win a Test in SA, England and Australia. We congratulate him & #TeamIndia for winning the very first Test of a series in Australia – a feat no other Indian team could achieve: BCCI Acting President, Mr CK Khanna

Congratulations team! What a fantastic start to the series. Our bowlers did great and superb innings by @cheteshwar1 and @ajinkyarahane88 @bcci Way to go! #INDvAUS pic.twitter.com/9XxqLn2Z6t

What a way to start the series!#TeamIndia never released the pressure. Superb batting by @cheteshwar1 with crucial knocks in both innings, @ajinkyarahane88 in the 2nd innings and excellent contributions by our 4 bowlers. This has brought back memories of 2003. #INDvAUS pic.twitter.com/4gmviaKeCC

India’s day again and we are on the verge of history. In Cricket, it isn’t over till it actually is over but tomorrow ,I look forward to seeing India win the first test of a series in Australia for the very first time #AusvInd pic.twitter.com/ukqMmRdq2f

Test Cricket is Best Cricket. Great fight by Australia in the end but India were too good. Winning after being 41-4 in first innings is a special effort. Outstanding Test match for Pujara and great effort from our bowlers. Promises to be a great series #AusvInd pic.twitter.com/PEYzKuBsap

Congratulations to India 👏🏼 Loved Australia’s fight to the end, need to move on quickly from this loss & prepare for Perth which is a quick turn around. #testcricketisalive

Well done India! Great fight by Australia… as I said from the start.. and I don’t feel any different.. India to win the Series 3-0.

India won and deservedly as well. But the way Australia fought till the end is symbolic of what lies in store for us the next month or so: good Test cricket #IndVAus

T 2031 – YYEEEEEEAAAAAAAHHHHHHHHHHHHHHH !! INDIA BEATS AUSTRALIA IN TEST .. Congratulations India .. this is historic .. well played .. so proud and happy for the team .. 🇮🇳🇮🇳🇮🇳🇮🇳👏👏👏👏🌹🌹🌹🌹

Some great fight from Australia, one significant partnership short of getting over the line! Congratulations to India, @cheteshwar1 the real difference. #AUDvIND

#India ably led by @imVkohli, as they win the 1st Test of a 4-Test series against #Australia at #Adelaide by 31 runs. A great way to start the series in overseas conditions especially in #Australia where #India has never won a series so far.

6th Victory for India on Australian soil,first time in the first test of a series. Great fight from Australia but a fantastic Test Match and a great victory for India, one to remember for a long time #AusvInd

India is the FIRST visiting team to win Tests in England, Australia and South Africa in the same calendar year. #AUSvIND

What a solid victory. Congratulations, #TeamIndia. Huge shout out to @cheteshwar1 and @ajinkyarahane88 for the stellar knocks, and our bowlers for getting the job done! #INDvsAUS @BCCI pic.twitter.com/MJGYVqZXTA

Congratulations #TeamIndia for the fantastic Win in Australia… This Indian team can win anywhere and from any situation 👏🏼👏🏼👏🏼 Great Captaincy by @imVkohli
Nd @cheteshwar1 is my man of the match 🤗 #INDvAUS pic.twitter.com/eI9dhfQJ09

Congratulations to the Indian Cricket Team for a well deserved win against Australia,
Well done #TeamIndia.#AusvInd

After a decade #TeamIndia has won a Test in Australia! Congratulations to the Men in Blue for this first and fantastic victory in Adelaide!

A special thanks to Pujara for making this victory possible! #AUSvsIND

Fingers crossed for a 4-0 whitewash! 🇮🇳

My heartiest congratulations to #TeamIndia for a scintillating win in the first match of a Test series Down Under against Australia. Best wishes for the rest of the Series. @BCCI #INDvAUS

Congratulation #TeamIndia @imVkohli on a well-deserved victory in #AdelaideTest For the first time, #India has won the first Test of a series in #Australia Special thanks to @ashwinravi99 @Jaspritbumrah93

A famous victory for us and one to remember for the times to come. Congratulations to #TeamIndia #AUSvIND pic.twitter.com/LCvb2OEux5