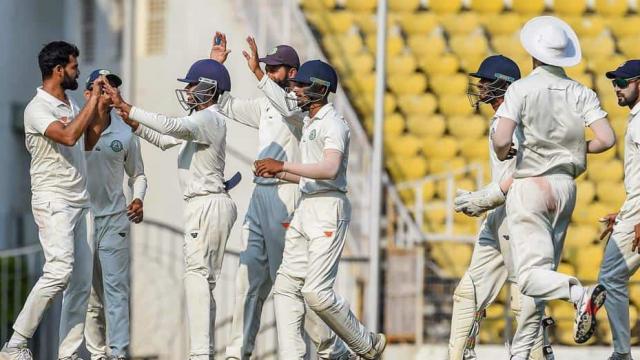 The Ranji Trophy match between Karnataka and Baroda on Thursday witnessed controversy after a BCCI commentator declared that ‘every Indian should know Hindi as it is our mother tongue.’ Ironically enough, the match is being contested by the two non-Hindi speaking states at the M Chinnaswamy Stadium, Bangalore. The incident took the social media by storm with angry netizens questioning the remark while some took it too offensively.

During the seventh over of Baroda’s second innings, one of the two on-air commentators said,

‘I liked the fact that Sunil Gavaskar is commentating in Hindi and is giving his valuable in the same language. I also loved it that he called the dot ball as a ‘bindi’ ball.”

While his partner, the other commentator Sushil Doshi responded in a similar manner, “Every Indian must know Hindi. This is our mother tongue. There is no bigger language than this.”

“In fact, I look at those people with a lot of anger who say that we are cricketers still we should talk in Hindi? You are staying in India then you will obviously speak its mother tongue,” he further added.

And naturally these statements brewed up a storm on social media as several fans quickly took to Twitter to voice their discontent.

Check out some of the furious reactions to the controversial comment:

This is ridiculous. Moreover @BCCI should not allow it's platform to be used for this kind of vendetta. How can he even think like that? Cricket playing is a skill. Doesn't require any particular language. India is much more than Hindi #stopHindiImposition https://t.co/MdzsGb4oCt

@STARSportsINDlA I am watching all sports events thru Star sports English commentary. Time to time all ads and commentators are switching to Hindi. I don't know why?. This is specifically for @jatinsapru . #stopHindiImposition .

Hey you idiots what the hell you're blabbering in the commentary box, India is not equal to Hindi,have some commonsense while speaking,Hindi is not Rashtrabhasha,@BCCI should sack these clowms from the commentary panel,it's an insult to non hindi speakers#stopHindiImposition https://t.co/YUq56zoMJH

For the uninitiated, here you go again: India DOES NOT have a national language, and you can't impose a language or a culture on anyone. If you still do have any doubts, read up on the Constitution and not lousy WhatsApp forwards #StopHindiImposition #RanjiTrophy #KARvBRD https://t.co/Iwv37kW1yA

Who are these commentators, sad they have started to use sports to push Hindi national language agenda..

There is no national language for India, most of the states in India has their own language!! #stopHindiImposition https://t.co/Sa9VPh0rvi

Here you go! @BCCI @BCCIdomestic @RanjiKarnataka
They can't say this when 2 teams who have their mother tongue to be Kannada and Gujarati to be playing!#ranjitrophy #KARvBRD pic.twitter.com/aKyigqGEVB

This is ur Rashtra-basha, u moron. Don't tell us what we should know and what not. Kannada is my my Rashtra-basha. You are a commentator for #KARvBRD feed so you better learn Kannada and Gujarati.

I don't know when these guys will know that HINDI IS NOT OUR NATIONAL LANGUAGE! https://t.co/2IOOXeZpRk

@StarSportsIndia
has to telecast an apology from this commentator. Why is he bringing his Hindi supremacist thoughts in the guise of commentary. He even foolishly says, there is no better language than Hindi. Is he high??? #StopHindiImposition #RanjiTrophy #KARvBRD https://t.co/ct6JhoSqLU

According to a 2011 Census, only 26 percent of the country’s population use Hindi as their mother tongue; while the data also revealed that, even though Hindi is the most widely spoken language in the country, almost six in every 10 people, or 56.37 per cent of the citizens, do not identify it as their first language or mother tongue.

Srinivas Gowda’s 100m record has been broken just a few day on by another buffalo racer!

Bangladesh players train with pollution mask ahead of 1st T20 in...

Crunching the numbers: Virat Kohli reveals his loathe for maths after...