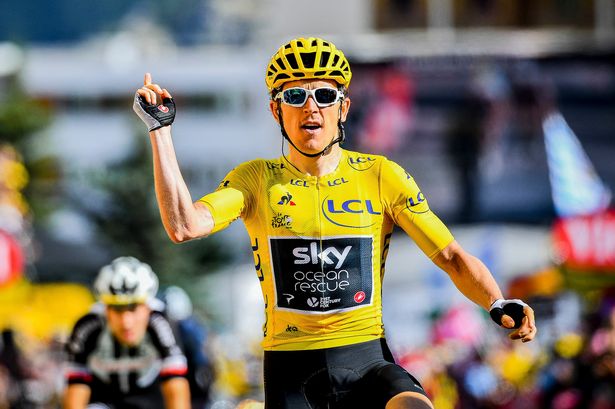 Geraint Thomas of Team Sky has secured victory in the 2018 Tour de France after arriving safe and soundly to the finish line in Paris on stage 21. The 32-year-old Thomas secured sixth Tour victory for Team Sky in seven years after a terrific performance over three weeks and 21 stages. 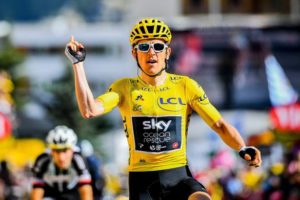 In the final standings, Thomas finished 1’51” clear of Dumoulin and 2’24” clear of Froome, with LottoNL-Jumbo team-mates Primoz Roglic and Steven Kruijswijk completing the final top five.

Four-time Tour champion Chris Froome was a heavy favorite to win this year’s tour but his hopes of matching Eddy Merckx’s record of four consecutive Grand Tour victories shattered in the final week as Welshman proved the strongest rider as he rode impressively for three weeks and pulled off two mountain wins.

Congratulation messages started pouring on Social Media for the Welshman and British PM Theresa May tweeted out:

Congratulations to @GeraintThomas86 on his success in the #TourDeFrance. A huge achievement that everyone in the UK can be proud of. 🇬🇧🏴󠁧󠁢󠁷󠁬󠁳󠁿🚴@TeamSky

Thomas told Eurosport that his win was “unbelievable”.

He added: “Normally that stage is really hard but today I just seemed to float around.

“There was goosebumps going around there.

“The support, the Welsh and the British flags, it’s unreal, it’s the Tour de France.

“To be riding around wearing [the yellow jersey], it’s the stuff of dreams.”

He added: “It won’t really sink in for a few months, it’s just a whirlwind now.

“I seem to be floating around on cloud nine.

Team Sky’s performance manager, Rod Ellingworth, reckons that even at 32 Thomas has plenty more in the tank. “He really does have the full package and he’s matured in the past two years and taken it on,” he said, smiling. “And he’s still pretty ambitious, too.”

Melbourne set to host crowd of 25,000 for Boxing Day Test between India and Australia

Here is why gold medallist boxer Anant Chopade is working in a farm!

“I love all my medals and will try to get sixth World Championship gold”-...