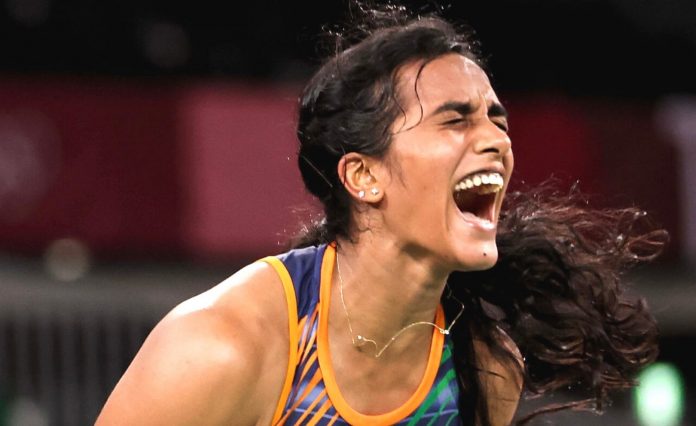 Indian badminton ace PV Sindhu clinched bronze at the ongoing Tokyo Olympics after a dominating performance against He Bingjiao, defeating the Chinese opponent in straight sets for the third place match on Sunday.

On the heels of her loss against Tai Tzu-ying in the semis, Sindhu bounced back strong against He and landed a striking performance that saw her bagging a 21-13, 21-15 win in the bronze medal match which lasted for 53 mins.

With her first bronze medal and her second medal at the Olympics, the 2016 Rio silver medallist has become the first Indian female athlete to clinch two Olympic medals, and the second athlete after wrestler Sushil Kumar to achieve the feat.

Sindhu took the lead in the first set, gaining 4-0 over He, who fought back to trail 11-8 at the break. However, the Indian shuttler finished off the first set 21-13 with impeccable drop shots.

The second set also saw an 11-8 lead for Sindhu at the break, with errors from the Chinese shuttler allowing her to increase her lead, and she finished the second set 21-15 to win the match.

“It makes me feel really happy because I’ve worked hard for so many years,” Sindhu said after winning her medal, “I had a lot of emotions going through me – should I be happy that I won bronze or sad that I lost the opportunity to play in the final? But overall, I had to close off my emotions for this one match and give it my best, my all and think about the emotions.”

“I’m really happy and I think I’ve done really well. It’s a proud moment getting a medal for my country,” she added.