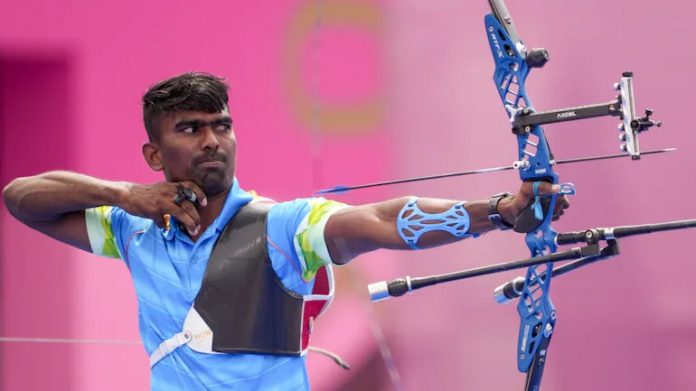 Indian archer Pravin Jadhav’s Tokyo Olympics campaign came to an end after losing his Round of 16 outing against three time Olympic medallist Brady Ellison of USA on Wednesday.

Coming from a brilliant 6-0 straight set victory against Galsan Bazarzhapov of Russia in the Round of 32, hopes were high on the top ranked Indian archer who was on his maiden Olympics.

Unfortunately, Jadhav’s Round of 16 clash against Ellison saw a repeatation of his earlier dominant scorecard, only that he was at the receiving end of the domination this time around.

World number one ranked archer Ellison, the 2012 Bronze and Silver and 2016 Silver medallist thrashed Jadhav 28-27, 27-26, 26-23 to secure his place in the next round, with the Indian shooting below eight twice in the second and third sets.

Prior to his individual campaign’s closure, Jadhav impressed on his debut with displaying good form in the Men’s Team event but suffered an exit in the Mixed Team event along with Deepika Kumari.
Earlier today, veteran Indian archer Tarundeep Rai’s third and final Olympics stint also came to an end after the 37-year-old Army man lost his second round outing against  Itay Shanny of Israel.

Rai, a pivotal figure behind the development of the sport of Archery in India, who earlier made appearances at the 2004 Athens and 2012 London Games, suffered his second straight round two exit from the Olympics.

The two time World Championships silver medallist had displayed a stellar performance against Oleksii Hunbin of Ukraine in the first round, coming from behind to win 6-4, was dominated by the younger Israeli in round two.