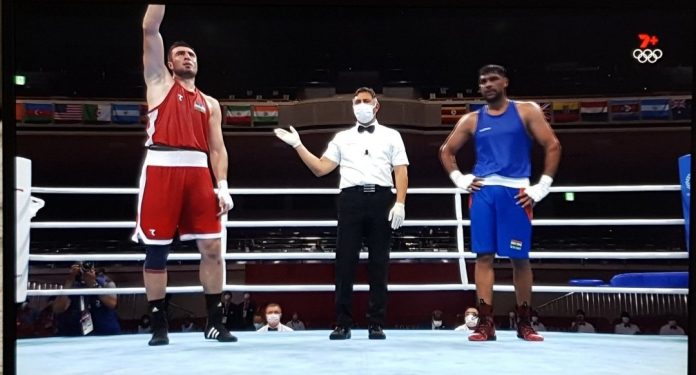 Indian boxer Satish Kumar, the first men’s Super Heavy (+91kg) pugilist to represent the country at the Olympics, went down in the quarterfinals at the ongoing Tokyo Olympics against reigning World Champion Bakhodir Jalolov of Uzbekistan via 5-0 unanimous decision on Sunday.

The bout started off with both fighters taking a cautious approach, as Jalolov attempted his share of jabs, Satish returned with hooks and connected some body shots early in the first round.

Satish continued his barrage of punches for the rest of the round, even sending the Uzbekistani into the ropes for an instance. Jalolov, however, picked up the pace in the final moments with evading some strikes and returning some.

Jalolov started to land more shots in the second round, eventually slowing down Satish who had started to reveal some weak points in his guard that the Uzbek boxer took advantages of, and eventually led the Indian into the ropes.

The third round started off in favour of Jalolov once again, with Satish failing to connect, while his opponent, thanks to his massive reach, was landing all shots on Satish, who even sustained a cut above his right eye.

The final bell rang and all five judges awarded the win to the Uzbek 30-29, earning him a berth in the semi finals.