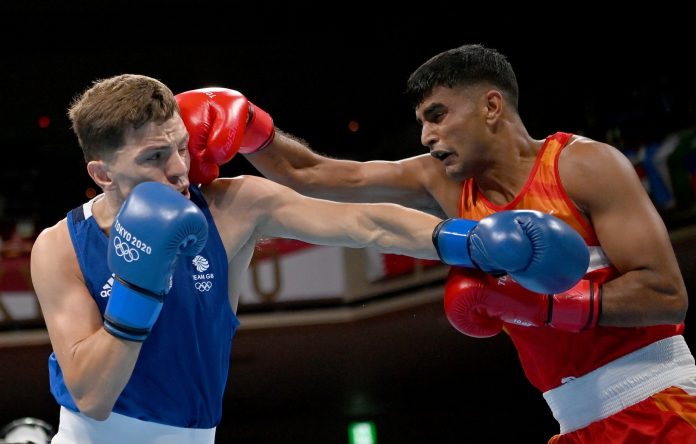 Indian boxer Manish Kaushik’s Olympics hopes came to an abrupt end after he lost his  Men’s lightweight (63 kg) Round of 32 outing against Great Britain’s Luke McCormack on Sunday.

A JCO in the Indian Army, Manish Kaushik started to exchange jabs with his Briton opponent right from round 1. With McCormack going into the offensive early, Kaushik was pushed to the ropes three times but none of them had made any major contact at first.

However, McCormack kept his offence going and the southpaw connected two back to back jabs, staggering Kaushik, who returned with a right hook and came back into the fight slowly as the first round ended on a slight edge for McCormack.

The second round started with Kaushik now taking an offensive approach towards McCormack, landing a number of jabs to the Briton’s body.

However, the 25-year-old left himself open in the process, allowing McCormack to return with some contacts. Nonetheless, it was Kaushik who overpowered in the second round from the center of the ring.

With both boxers being awarded a round each, the third and final round was to decide the winner. As soon as round 3 started, Kaushik went at McCormack with a flurry of punches, but the 26-year-old from Sunderland retaliated with precision at the end, winning the favour of the judges.